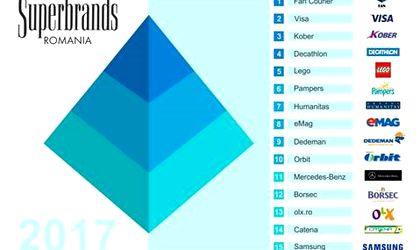 BDR Associates announced the first results of the Superbrands 2017 study, conducted in partnership with IPSOS in February-March 2017.  Fan Courier takes the number one spot in Top 15 Superbrands 2017, with a very important jump compared to last year’s edition. It’s for the second time in the Superbrands Romania 10 years’ history that a Romanian brand leads the top, this performance being achieved before only by Borsec, at the Superbrands edition 2011/2012.

The e-commerce, found in the last years in a rising and very alert trend propelled and consolidated in the Top 15 Superbrands a series of young brands such as Fan Courier, eMAG, olx.ro, alongside brands of famous online financial services such as Visa (2nd place in Top 15 Superbrands 2017).

In the context of the digitalization as a global business directions, the brands knew how to empathize with the consumer’s priorities, to meet his expectations, at the moment and with the right message, won in loyalizing their clients. Some of the relevant examples are Catena, Samsung or Orbit that rolled marketing and communication campaign well targeted and adapted to the specific of the consumers’ segments, but also Decathlon or Dedeman, with a very active presence on different online and offline media segments, Dedeman finding itself on the second place in Top 15 Superbrands, year after year, in the last 3 years.

With an alert dynamic in both online and offline, the brands in the construction segment stepped up in Top 15 Superbrands 2017 (Koeber – 3rd place, Dedeman –9th place).

On other hand, brands with tradition such as Borsec, Pampers, Mercedes-Benz, are keeping an honorable position in Top 15, because they are the brands that re-confirmed their promises towards their consumers and succeeded in keeping up with the consumers’ needs and their new consumption habits, manifested in the market, as well as the Romanian consumer’s interest in enhancing the everyday life, the desire of investing more in quality products for the household, health, good quality and personal care.

„At Superbrands Romania’s first edition, implemented by us in 2005-2006 we were looking with admiration towards Finland whose Superbrand book was formed totally of national brands that became global. We were wondering back then, in full pioneer moment of our program, if we would ever take part to such an honorable performance in Romania as well. We live now this effervescent phenomenon of the Romanian brands that are stepping up the ladder of the impeccable reputation, through excellence in branding, doubled by quality and innovation. We know that there are brands born in Romania such as Borsec, Dacia or Ursus whose awareness surpassed the country’s borders, becoming international and rising the Romania’s image capital. The Romania brands are glowing today alongside the famous international brands contributing in an equal manner to the growth of the quality life and we have to recognize them,” said Catalina Rousseau, country manager Superbrands Romania.