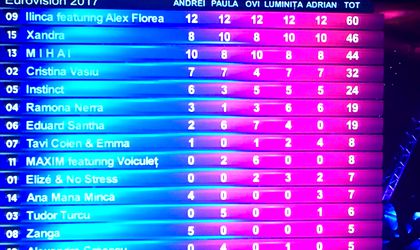 Cristina Vasiu, MIHAI, Ramona Nerra, Ana Maria Mirica, Instinct, Ilinca feat. Alex Florea, Tavi Colen&Emma, Maxim, Eduard Santha and Xandra are the finalists of this year’s Eurovision contest in Romania. They will compete on Sunday, March 5, for a chance to represent the country in Kiev.

The members of the jury decided unanimously that the song that deserves 12 points is Yodel It!, Ilinca and Alex Florea succeeding the performance of receiving the maximum number of points -– 60. The emotions were big also for Ana Maria Mirica, who received the same amount of points as Elize & No Stress (7 points). According to the regulations, the difference was made by the scores gathered individually from the members of the jury and the biggest grade gained by every track.

The host of the show was Iuliana Tudor, supported from the Green Room by Ioana Voicu and Dan Helciug.

The Eurovision Romania Contest winner will be chosen exclusively by the public, via televoting. The show will be broadcasted by TVR.