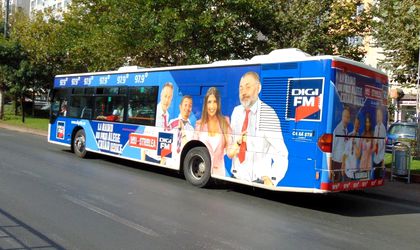 Shortly before the fourth anniversary of its first broadcast, Digi FM brings to the Romanians from the Capital and big cities from the country an original brand campaign: “On the radio you can’t choose just anything”. Digi FM’s morning show team is at the center of this campaign as they are the people setting the rhythm of the day for station’s listeners. Hosts Miu and Striblea are joined by Beatrice Ghiciov and Bogdan Ciuclaru, the smile and the sarcasm, the kind-hearted and the full of laughter team members.

“Digi FM has had a remarkable evolution in the last year, with a growing audience and a mature brand attitude, which makes the difference in a very fragmented market. The investment in this autumn campaign is significant. The new campaign will consolidate Digi FM’s reputation as a media product that means: relevant information for a mixed public, quality entertainment, an energizing musical selection, meaningful debates, and a team that functions like a Swiss clock. Therefore, a recipe that deserves all listeners’ trust,” said Serghei Bulcag, the CEO of Digi | RCS & RDS Group.

“Bogdan, Catalin, Beatrice and again Bogdan made 137,600 new friends this past year, all over the country, according to the most recent Study of Radio Audiences (SAR). With an average of almost 840,000 listeners, Digi FM is among the top national radio broadcasters. That makes our morning show hosts happy and makes us, their colleagues, very happy as well. The growth from one study to the next, in almost 4 years since Digi FM’s first broadcast, supports the slogan of the new campaign – On the radio you can’t choose just anything – and the Digi FM morning hosts thank their listeners for their fidelity,” said Cetin Rasit, Digi FM Programs Coordinator.

Through this campaign, Digi | RCS & RDS continues its investment in the private radio with the largest territorial coverage in Romania, showing trust in the brand and the team that has built everything that Digi FM stands for, season after season.

“On the radio you can’t choose just anything” will be visible during September to December 2019 on the buses and Bucharest’s metro and in the big cities in Romania, in transit, on LED displays, in partners’ spaces and on the Digi | RCS & RDS network. The campaign was created by the Digi FM marketing team, Alexandra Neagoie – Damian, Brand Manager, Ciprian Olaru, Senior Art, Bogdan Ciuclaru, Copywriter, Cristian Andrei, Photographer and Catalin Ivan, Digi FM Director. United Media, Serigrafic Constanta, Phoenix Media and Aleea Media helped with the implementation of the newest Digi FM campaign.