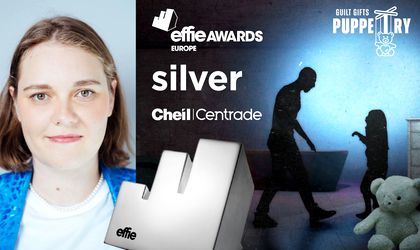 Strategic communication consulting and data intelligence company Cheil | Centrade, the hub for Southeast Europe of the Korean network Cheil Worldwide, has won a its first trophy at Effie Europe Awards, a Silver Effie in Positive Change: Social Good – Non-Profit category, for the campaign against domestic violence, ”The Guilt Gifts Puppetry”, created to support ANAIS Humanitarian Association. This is also the first Effie Europe trophy obtained for the first time by the Cheil network.

The success achieved at the Effie Europe Gala celebrates the effectiveness of this pro-bono campaign, which has brought tangible results in the fight against domestic violence, the most important of which is the over 790% increase in donations to this cause. „The Guilt Gifts Puppetry“ also won the Grand Prix of the IAB Europe Mixx Awards 2022 festival, as well as two Gold trophies in the Branded Content and Non-Profit/CSR categories, an absolute first for Romania at this festival. Two Bronze trophies at Cresta Awards London 2021 and Caples Awards London 2022, respectively, complete the list of awards obtained at global festivals dedicated to creativity in communication. In 2021, the campaign won the Grand Prix at the IAB MIXX Awards 2021, as well as two Gold trophies for Best Branded Content Campaign and Best Corporate Social Responsibility Campaign. Also in 2021, it scooped the Gold from Internetics in the Social Campaigns section.

The Guilt Gifts Puppetry is the first experimental theater series in which the protagonists on stage are real toys belonging to the victims of domestic violence. The characters came to life through the goodwill of the most awarded Romanian actors, from Medeea Marinescu to Victor Rebengiuc, who gave voice to the protagonists, but also of the several entertainment production companies, such as the puppet artists from The Lightwave Theater Company, the team of scenographers, animators and producers from Les Ateliers Nomad, the dance group from Mike’s School of Dance or the photographer Adi Bulboacă.

The 8 episodes could be watched on daruitdinvina.ro, but also on the Romanian online content platform, Streamerse.net, where people were able to donate for the cause. The campaign attracted prestigious partners, such as television station Prima TV with special coverage on prime-time news, and the Artmark Art Auction House, where the toys were auctioned off to raise funds to help victims of domestic violence. 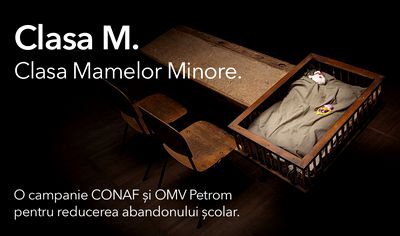 Read more about
The “Youth Pact” project, initiated by CONAF and sustained by OMV Petrom, has a new video campaign
read more

“This campaign is a very special one. Both through the topic addressed (behaviours that keep women in abusive relationships), through the results that contributed to the prevention of relapse in domestic abuse, but also through what it means at the level of the Cheil network, as well as at the level of the Romanian creative industry, thus honoring the name Cheil which means “First” in Korean. “The Guilt Gifts Puppetry” is the campaign that brought Romania its first Grand Prix and two gold trophies at the IAB Mixx Europe Awards. It is the campaign that brought us the first trophy at Effie Europe, this being a first for Cheil Worldwide as well. We want to thank the hundreds of volunteers and partners who contributed to this extraordinary achievement, but especially the Anais Humanitarin Association team. Their passion fully deserves this award.”, comments Mihai Gongu, Executive Creative Director, Cheil | Centrade.

“Effie Europe is a festival that rewards communication efficiency at its highest level. Beyond the awards, however, the most important result, of which we are extremely proud, is the sparking of a national conversation that has generated pressure for legislative change and the introduction of electronic bracelets for abusers. Perhaps not by chance, this award comes in November, the month in which the Anais Humanitarian Association completes 11 years of activity, 11 years in which it has changed the lives of thousands of women, victims of domestic violence. Cheil | Centrade has been by their side for over 3 years. We are excited about this collaboration and of all the pro-bono campaigns done together.”, mentions Miruna Baias, Strategy Head, Cheil | Centrade.

“I want to thank the Cheil | Centrade team- their talent, energy and enthusiasm remain our strongest asset. I am particularly proud of this award as it is our first Effie Europe and the first for the Cheil network.  With so many messages and sometimes too much content in the world today, this award clearly acknowledges the impact of the campaign and brings to light a difficult subject that has a profound impact on our lives and society.”

Cheil | Centrade and the ANAIS Humanitarian Association have been collaborating since 2019, in a joint effort to increase public awareness of the scale and severity of the domestic violence problem in Romania, with all its medium and long-term social consequences.

The collaboration began with #VociNetacute, a campaign that gave women the courage to break the silence and give voice to their own stories. Through the experimental film “Silent Voices”, made from testimonies of victims overlapped on footage from silent films, the campaign brought to light the various types of domestic violence to which women can be exposed, from psychological abuse to economic or sexual abuse.

This was followed by #IzoleazaViolența campaign, launched in the context of the social distancing imposed in the COVID-19 pandemic, which warned of the escalation of domestic violence during the state of emergency and isolation, through a dedicated digital platform and a series of films and posters inspired by virus news coverage.

The latest initiative is the one launched in March this year, when lifting the restrictions related to the pandemic, emphasizing that “Some masks remain”.

Cheil | Centrade is the only Romania agency awarded with Gold at international...