Campaign by Jazz agency, among 15 in the world awarded with gold at Cannes and Effie 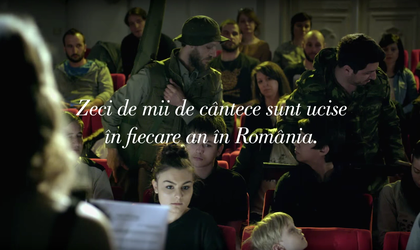 The campaign “Opreste barbaria, Salveaza Ciocarlia” (Save Our Songbirds), created by the Romanian independent agencies Jazz and Rogalski Damaschin, was declared as one of the only 15 most creative campaigns at an international level in 2016, included in the famous and wanted The Gunn Report.

It brought Romania the only Gold Lion at Cannes and Gold Effie in 2016 and succeeded in changing a law, surpassing therefore the classic advertising barriers, being the only one in Romania present in the top this year.

Moreover, Save Our Songbirds finds itself in an excellent company alongside campaigns for brands known for their creativity proven year by year at the international festivals, such as Old Spice, Burger King, and Ariel. The full list can be accessed here.

Cases for Creativity 2016 represents a round-up of the campaigns that have achieved the highest accolade in advertising by winning both a Cannes Gold Lion for creativity and a Gold Effie award for effectiveness.  Cases for Creativity is an annual study by James Hurman, author and founder of innovation consultancy ‘Previously Unavailable’.

“You cannot ask for more: a law pro hunting changed with zero budget and that now protects the singing birds, Gold in Cannes and Effie and the first entry in the Gunn Report. When we will receive the same results on a commercial project as well, Jazz will become equal to any high achieving agency in the world,” said Valentin Suciu, creative director Jazz.

The campaign created by Jazz succeeded outstanding international performances, such as the presence in the top of the most popular campaigns on adsoftheworld.com and www.bestadsontv.com. Moreover, the bloggers in the UK related the songbird’s story, www.mygreenpod.com, one the biggest environment blogs in the UK, narrating fully about the campaign, and the negative impact of the law project. The journalists at BBC Wildlife Magazine and La Reppublica published articles in the magazine’s print editions and in the Italy’s daily. The biggest international animal rights organizations, amongst which PETA and Birdlife International, publicly expressed their support for the campaign and stopping the law in the proposed form.

„ A subject that seemed not to interest anybody, even it was of public interest, became in just some days a theme of national debate and a subject for the press and important bloggers in all the civilized world. It was one of the most intense and full of learnings campaigns that we’ve ever contributed with our expertise and energy. We are thanking once again those who convinced the politicians not to vote a law against the laws of nature,” said Eliza Rogalski, head of Strategy Rogalski Damaschin Public Relations.

The results of the campaign surpassed all agency’s expectations: over 300,00 views of the video spot on the Hotnews.ro platform, 15 news and TV and radio feature reports, from which a reportage at Pro TV in prime-time,129 articles in the online press and blogs, 16 appearances in the print press, 9,047 signatures on the online petition, 11,822 unique views on the website salveazaciocarlia.ro, over 35,000 views of the spot on YouTube, 2,368 Facebook shares, 92,408 organic reach on the Facebook page in a month, 293,205 views on the Facebook page in a month.

All these results brought also a Gold Effie for the campaign, proving that a creative campaign, came from the right insight and with a good strategy will lead always to efficiency.

The campaign “Save Our Songbirds” is initiated by the Romanian Ornithological Society and Natura 2000 NGO Coalition, with the support of Jazz Communication, Rogalski Damaschin Public Relations, Film Factor and Pukka.

The teams that contributed to the campaign’s results are: