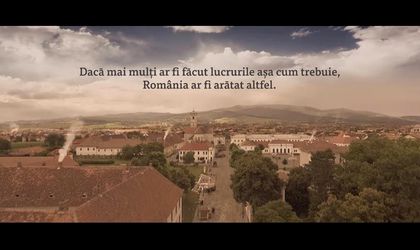 As Romania celebrates its Centennial, Papaya Advertising wonders how would have Romania looked if our actions would have been the right ones – definitely, different. With a scenario that adapts perfectly in a social and political context that raises the problems and with a strong message, the new TVC shows the brands’ values through an exercise of imagination signed by Petru Cuciuc & Robert Soparlache, art directors and Valentin Lica, copywriter.

“I was practically forced to give the highest score to this TVC for the manner in which it succeeded in capitalize a nation’s state of fact. For the courage to make this powerful statement for a local brand in the context in which all are turning their look away. For the manner in which this story was delivered. For the fact that it made me say: if more Romanian TVCs would have been made like that, the Romanian advertising would have been different,” said Teddy Sandu, creative director at GMP Advertising & ADC*RO member.

Papaya Advertising’s Work of the Month is also the winner in the TV section. On the second position we find again the creatives from Papaya with a campaign for Savana Unistrat: Constructii pozitive datorita savana Unistrat (Positive constructions thanks to Savana Unistrat). The third episode of the campaign comes back in force with a superior coverage for mistakes, both the grammatical ones and the other kinds. The team that worked on the project is formed of Petru Cuciuc & Robert Soparlache, art directors and Valentin Lica, copywriter.

The work that closes TV’s top 3 is still a Papaya Advertising one. Descopera Drobeta (Discover Danube Delta), the crocodile episode, is signed by the same team.

June brings only one accolade in this category and it goes to FCB Bucharest, the agency that signed also the May’s Idea of the Month – Be Their First Spectator – a project for baby monitor Philips Avent at which worked Emanuel Borcescu (head of art & art director) and Razvan Ghilencea (copywriter).

The category holds another accolade: Bicicleta Beata, (The Drunk Bicycle), a Mercury360 project for the Romanian Police, that starts from a simple insight: after you drank something you have the impression you can take a round on the bicycle, but the story changes when you get on it. With a modified direction mechanism, the Drunken Bicycle seems controllable, but it becomes difficult even for the most experimented bicyclists that are testing it. In May, it started a tour around the country in order to offer an entertaining lesson about the safety on two wheels, through the creative contribution of Oana Sandru (copywriter) and Mircea Vlase (art director).