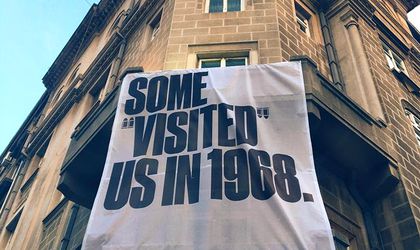 ADC Romania’s August winning work is the campaign Some “visited” us in 1968 for the Czech Center, which also takes the number one spot in the OOH section.

The text: Some “visited” us in 1968. You did not. So visit us in 2018! is an appreciation towards Romania’s refusal to invade the Czech Republic in 1968. The team behind the idea was formed by Frantisek Zachoval (the director of the Czech Center) // Concept & Text and Andrei Turenici // Graphic Designer.

“A very smart print! A simple, but not simplistic typo, a correct one. Very British. When I saw it on Facebook I told myself that this is not from Romania! But it could have been done by us or by the Albanians. You get it if you didn’t skip the history classes in the 12th grade. A smart print for the target as well. It’s like an intervention of Cornel Dinu in a sports TV show with the eternal mono-syllabic guests in which he comes and compares Mourinho’s strategy with the one of Napoleon in the Waterloo fight,” said Arpad Rezi, ADC*RO member & Co-Creative Director at Mainstage.

The first place in this category goes to the campaign Chill Battle from Kubis Interactive for Ursus Cooler. The team that created the battle between Sergiu and Costel is formed by Alina Radut & George Stefan (Art Directors) and Alexandra Horvath & Ioana Negrea (Copywriters).

Second place goes to  O mamă la nevoie se cunoaște, (You know a mother when you are in need) a CSR project developed by the agency WOPA for the Romanian Beer Association, with Alex Cotet who puts himself in the mother role in order to highlight the peril of alcohol consumption while driving. The idea belongs to the team: Andrei Deleanu (Copywriter) and Mihai Gheorghiu (Senior Art Director).

An accolade in the category goes to the campaign #SunaUnPrieten (#CallAFriend) thought out by MRM Romania for Metropolitan Life. The idea belongs to the team: Denisa Armasu (Senior Copywriter) and Razvan Banica (Art Director). #SunaUnPrieten encourages people to choose an insurance the way they want it and shows the consequences that can appear without one.

The first place belongs to the campaign Filme pe care vrei să le vezi chiar dacă stii spoilerele (The movies you want to see even when you know the spoilers) for the tenth edition of the Film and Histories Festival from Rasnov. The idea belongs to the agency MullenLowe Romania, and the team was formed of Silviu Antohe (Art Director) and Mihai Costache (copywriter).

The second place went to the special labels for Sticlele Apa Nova – Viitorul fara plastic, (The Apa Nova Bottles – The future without plastic) while the creative idea came from Julien Britnic (Copywriter), with Bogdan Petcu – Art Director. In order to attract attention towards caring for environment, Apa Nova and the two creatives imagined a world without plastic.

The accolade in the category goes to Red Cross – Soldier , a campaign for the Romanian Red Cross, implemented by Valentin Ionescu (Art Director) and Radu Nantu (Copywriter) from MullenLowe Romania.

Some “visited” us in 1968 takes also the number one place in the OOH section, while the campaign Filme pe care vrei sa le vezi chiar daca stii spoilerele, by MullenLowe Romania takes the second place in this section.

A diploma in this category went to McCann Worldgroup Romania for Mastercard Tiny Home. The team formed of Mocanu Serban (Art Director) and Ruxandra Andrei (Copywriter) came up with a creative solution to the problem observed by Mastercard: the lack of places to stay in during music festivals. Therefore, Mastercard and McCann Worldgroup Romania transformed the participants’ experience at music festivals by putting up a sustainable house right at the festival’s heart, be it Electric Castle or Summer Well.