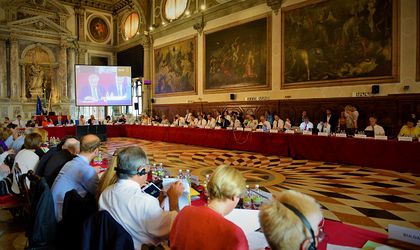 The Venice Commission has made nine recommendations to Romanian authorities over the planned changes to the justice laws.

One of the recommendations states that the president and the Superior Magistracy Council (CSM) should be maintained in the procedure of appointment/dismissal of high-ranking prosecutors including by revising related provisions of the Constitution. The Commission says this will be able to balance the influence of the minister of justice in the process.

The opinion of the Venice Commission comes weeks after Romania’s Constitutional Court ruled out that president Klaus Iohannis has to remove the chief prosecutor of the National Anti-corruption Directorate (DNA), at the request of the minister of justice, Tudorel Toader. Earlier this week, Laura Codruta Kovesi was fired by the president as head of the DNA.

Other recommendations of the Commission:
– Remove or better define the provisions enabling the superior prosecutors to invalidate prosecutors’ solution for groundlessness;

– Remove the proposed restriction on judges and prosecutors freedom of expression;

– Supplement the provisions on magistrates’ material liability by explicitly stating that, in the absence of bad faith and/or gross negligence, magistrates are not liable for a solution which could be disputed by another court; amend the mechanism for recovery action in such a way as to ensure that the action for recovery only takes place once and if liability of the magistrate has been established through the disciplinary procedure;

– Reconsider the proposed establishment of a separate prosecutor’s office structure for the investigation of offences committed by judges and prosecutors; the recourse to specialized prosecutors, coupled with effective procedural safeguards appears as a suitable alternative in this respect ;

– Re-examine, with a view to better specifying them, the grounds for the revocation of SCM members; remove the possibility to revoke elected members of the SCM through the no-confidence vote of the general meetings of courts or prosecutors’ offices (including by the way of petition);

– Identify solutions enabling more effective participation, in the work of the SCM, of SCM members who are outside of the judiciary;

– Abandon the proposed early retirement scheme unless it can be ascertained that it will have no adverse impact on the functioning of the system;

– Ensure that the proposed “screening” measures of magistrates are based on clearly specified criteria and coupled with adequate procedural safeguards and a right of appeal to a court of law, and identify ways to strengthen oversight mechanisms of the intelligence services.