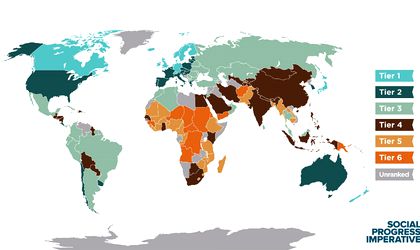 Romania ranks 44th in the world and last in the European Union in the Social Progress Index 2018 measuring people’s quality of life and the well-being of society. The index is conducted by Social Progress Imperative nonprofit organization with the support of Deloitte.

“When we talk about the well-being of a country, we usually take into consideration the GDP per capita, but it does not fully and faithfully reflect the quality of citizens’ everyday life. There are countries that rank higher according to the Social Progress Index than according to GDP per capita. By systematically analyzing the relationship between economic development, measured by GDP per capita, and social development, measured by SPI, we can see how a country’s level of wealth contributes to the welfare of every of its citizens,” says Vlad Boeriu, Partner, Deloitte Romania.

This year, Norway, Iceland and Switzerland are the world’s best performers, while Afghanistan, Chad and the Central African Republic are on the last places.

The 146 countries are distributed in six tiers according to the score. The member states of the European Union, with the exception of Bulgaria and Romania, are in the first two categories, with a high level of quality of life.

Romania ranks 44th this year, compared to 51st, in 2014. The scores registered for each indicator analyzed by SPI are compared to the ones of 15 other states registering a similar GDP per capita (including Bulgaria, Croatia, Latvia, Greece, Belarus, Kazakhstan, Turkey or Iran). According to the scores, Romania performs weaker than the 15 states with a GDP per capita similar on the following chapters: water and sanitation, access to quality medical care, access to advanced education, life expectancy of people over 60 or social inclusion.

“Romania’s lower scores show where the deficiencies are in the distribution of the economic growth and the public spending. In conclusion, this report points out the indicators that need an improvement as far as the quality of life in Romania in concerned. The decision makers can use it as a public policy tool to set up a long-term strategy,” explains Vlad Boeriu.

Social progress is the ability of a society to meet the basic needs of its citizens and to create opportunities for their development. SPI thus shows the directions in which governments, business and nonprofit organizations can contribute to improving the quality of life.