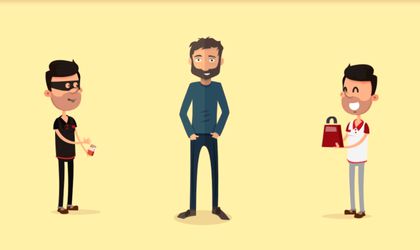 The economic environment in our country is heavily affected by the illicit trafficking of goods, is the main conclusion of the study “Traditional Retail Perception of Illicit Goods Trafficking in Romania” initiated by the ACTIV Association. Of the subjects, 55 percent believe that the sale of smuggled or counterfeit goods has contributed to the cessation of the business.

In addition, 2 out of 10 retailers say their turnover would be double if there was no illicit trafficking. Sociological research was carried out on a sample of over 700 subjects, representatives of economic agents, and was conducted by the Romanian Institute for Evaluation and Strategy in July 2018.

“The approach to assess the impact of illicit goods traffic on the retail environment came as a result of the need to raise awareness of the gravity of the phenomenon. The health of the population is directly threatened by the consumption of smuggling and counterfeiting products. But it’s not the only threat. And the economy suffers from this cause. More than EUR 3 billion do not go to the state budget annually, with the disappearance of tens of thousands of jobs. Citizens, economic agents, state institutions, we are all responsible for the situation. We are currently concentrating our efforts on the preventive side through an education and information campaign that aims to change the attitude towards the social acceptability of the phenomenon,” says Daniel Maracineanu, general manager of ACTIV Association.

Buying illicit products presents, on the one hand, a major risk to the health of the population and, on the other hand, has a direct impact on the decrease in traditional retail sales. This fact has caused 9 out of 10 small retailers to say that smuggling affects their business in a negative way.

“The lower price of these products, the low incomes of the population and the lack of awareness of the risks associated with consumption are the main factors favoring the smuggling of counterfeit and counterfeit goods,” said Dan Jurcan, research director at IRES and coordinator of this study.

According to the same survey, the Border Police, the Romanian Police and the Customs General Directorate occupy the top three places in the top of the institutions that should be more involved in the fight against illegal goods trafficking, followed by the Government, local authorities and the Parliament.

Almost half (43 percent) of respondents say they have heard about the sale of smuggling or counterfeit products in their own locality. Markets, stores, and merchant shops are, in their view, the places where smuggling or counterfeit products are mostly marketed. The categories of such products are mostly cigarettes (63 percent), followed by alcoholic beverages (32 percent), clothing and footwear (31 percent), and food and cleaning products (14 percent) each. This is particularly worrying because research shows that food, soft drinks, cigarettes, alcoholic drinks, cleaning and maintenance products, clothing and footwear are among the main products whose marketing ensures the survival of small retail.

“This study provides the first clear picture of how smuggling smashes all the right businesses in Romania. However, bad news for economic operators selling tobacco products does not end here. Until May 2019, the traceability system for tobacco products imposed by the European Union must be implemented across the supply chain. Unfortunately, so far, there is no indication of how this system will look like because the Romanian legal framework has not been created. There is a risk that all over 70,000 economic operators selling tobacco products will not have enough time to implement the traceability system and thus block the entire legal cigarette market, generating large illicit market opportunities,” says Ileana Dumitru , director of Legal and Public Relations of British American Tobacco Romania.

“Small and medium sized traders are very affected. Shops are closed daily. It means: money out of the country, destruction of family affairs, impoverishment of Romanian producers, sabotage of Romanian products, disappearance of jobs. Most small retailers carry out fair economic activities, being aware that the business, usually a family, is the only source of existence. Our association will be involved in combating illicit trafficking in merchandise, and we hope the state will come up with policies to support traditional trade,” says Cora Muntean, president of the National Association of Small and Medium Sized Traders in Romania (ANCMMR).

“The Employers ‘Owners’ Federation is campaigning for a healthy economic and social environment for fair competition. From the data on the dynamics of the Romanian labor market over the period 2016-2017, we observe that 30 percent of the individual work contracts (CIM) in the economic sectors dominated by domestic capital, i.e. about 800,000 out of the 2.65 million jobs, are in commerce. In this context, we mention that most new jobs created last year in the sectors where the domestic capital predominates, are exposed to phenomena such as illicit trafficking in goods,” says Andreea Bunea, executive director of the Domestic Investors Patronage (PIAROM).

Three out of five respondents say they would advertise smuggling. The main three reasons why some respondents would report the illegal trafficking are the desire to stop the phenomenon, the fact that their own sales are affected, and the fact that this phenomenon is perceived as unnatural and incorrect. Fearing that one might find out who warned the authorities of breaking the law is the main hindrance in denouncing illegal facts, according to 28 percent of respondents. This factor adds to the lack of interest in the actions of others (15 percent) and the perception that only the authorities are responsible for combating the phenomenon (8 percent).