Working Romania | Oana Motoi (Cromwell Evan Global): “Robots will replace most physical work within 20 years, but employees will remain at the heart of any business” 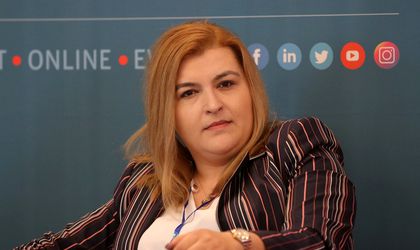 Like in many other countries, parents in Romania tend to push their children towards university, and this has led to a deficit of blue collar workforce for industries like construction, said Oana Motoi, Managing Partner at Cromwell Evan Global, during BR’s Working Romania conference on Tuesday.

“We’re reaching a point where we have to look for immigrants to do the jobs that we no longer want to do, just as Romanians and other eastern Europeans replaced workers in western Europe in previous years,” Motoi said.

She talked about the different types of emigrants from Romania and their reasons for leaving the country.

“There are two big categories of Romanian emigrants – those who are working in blue collar professions, who leave due to the low salaries and living standards, and the highly qualified workers/white collar, who leave due to a lack of proper governmental infrastructure (medical system, education, roads) as well as a result of globalization and the fact that working at multinational companies gives them the opportunity to spend time working in various other countries, which makes them aware of the fact that life is easier over there and convinces them to eventually move away for good,” she explained.

Motoi added that big companies are starting to rethink their organisational structure and hierarchy in order to motivate the new generations of employees.

“One interesting example is the idea of ‘holacracy’, which has only been implemented by a few large companies, including Google and Zappos: the employee no longer has a strict job description; instead of working for the boss, teams work towards a common goal, which makes them more responsible, and this brings much better results for the company overall.”

Oana Motoi spoke about one of her company’s clients, an international NGO that works towards helping the homeless and teenagers in orphanages integrate into society by training them for various jobs, either internally within the NGO but also in other companies through partnerships – this helps both the people and the companies that have a need for unqualified employees.

“This project will begin in January or February next year – over 200 people will be involved as volunteers in this project and help integrate institutionalised or homeless children into the workforce – they will receive accommodation and training over the course of 4 years, and the project sponsors will hire them in the end. We’re hoping that this action will contribute to lowering the emigration rate among these young people.”

The Cromwell Evan Global representative also spoke about her expectations for the future in terms of Romania’s education system and entrepreneurial spirit.

“I’m quite optimistic for the future. In the past two years, I’ve seen people who chose entrepreneurship but quickly discovered that it wasn’t what they expected, so they went back to being an employee. An easy life is a priority in Romanian society, and the pressure of having enough money to pay the salaries at the end of the month is sometimes too high for us. This is why we have to change the education system. As an entrepreneur, you have to fail in order to learn. In 20 years we’ll have robots replacing most physical work, but employees will remain at the centre of any business,” Motoi argued.