Radisson Blu Aurum Hotel opens in Brasov in October, after an investment of EUR 16.3 million 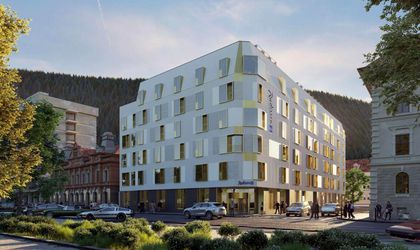 After 34 months of work that involved a team of 250-400 people monthly, Radisson Blu Aurum Hotel opens its doors in Brașov on October 16. The total investment amounts to 16.3 million euros, almost 3 million euros more than the value initially estimated. The hotel in the centre of Brașov rehabilitates a building in an advanced phase of decay and becomes a landmark for premium tourist services.

110 elegant rooms, an event hall with a capacity of 150 people, a restaurant with a terrace, a skybar, swimming pool, SPA, charging stations for electric vehicles, monitored parking – these are some of the facilities that Radisson Blu Aurum Brașov will offer starting this October.

The 5-star hotel in the centre of Brașov combines the old and the new in an elegant symbiosis, preserving some of the features of the original building, built in 1930, but also a fragment of the Brașov citadel – discovered during the execution works. The hotel brings with them a premium design, with exceptional details and a superior quality of services. Accommodation prices start from 125 euros/night.

The target audience for our hotel is a client with high expectations, accustomed with the standards of quality tourism. Brașov is the most visited city in Romania, therefore the opening of a chain hotel offers the opportunity to increase the level of premium services in the Brașov area. We expect Radisson Blu Aurum to be a destination not only for leisure tourism, but also for business, considering the dynamic economy of the area, stated Anca Cristea, General Manager of Radisson Blu Aurum.

Investment increased by the pandemic and the complexity of the project

The investment in the newest hotel in Brașov amounts to 16.3 million euros, although it was initially estimated at 13.6 million euros. The difference comes from rising costs in both the building materials and labour segments amid the pandemic context and market volatility. The investment was financed through Exim Bank by RaRa Group, owners and developers of the hotel.

From the location in the historic center, which brings specific architectural rigors, to the complex project of consolidating the existing building, a building in an advanced stage of decay and classified in seismic risk class 0, from the preservation of historical vestiges of relevance in the history of Brașov, to the fact that the execution works were affected by the pandemic just two months after their start, well, all this proves that we are at the end of a path marked by challenges. Consequently, the result could only be a particularly complex and demanding work from the point of view of design, both interior and exterior. For example, in each of the hotel’s rooms, it was necessary to harmonize more than 50 different materials and products, which guests can observe. Many examples like this give a special identity to the project, easy to perceive and experience from the first visit, stated George Mihalache, architect at Arhi Grup.

In the development and design phase of the investment, which lasted 4 years, more than 120 specialists from various fields were involved.

Then, during the almost 3 years of execution works, between 250 and 400 people were involved monthly, and more than 100 local companies with high expertise in their field were contracted. Among the significant challenges of the project is the discovery of the fortress wall, initially perceived as an extreme situation, which then turned into an opportunity to highlight part of the city’s ancient history.

Starting with the excavations of the building built in the 1930s and 1960s, more than 1000 tons of materials were evacuated, and more than 650 tons of reinforced concrete were used for consolidation. If we calculate all the quantities handled in our project, we exceed 3000 tons of materials and over 850 deliveries with different types of vehicles – stated Ramona Neamțu, owner of Radisson Blu Aurum Brasov.

Radisson Blu Aurum aims to contribute to the development of the local economy not only by raising the level of local tourist services, but also by becoming an important employer. The hotel team will have more than 70 employees, and this has already been finalized in proportion to more than 75%.

By its opening, Radisson Blu Aurum becomes a preferred destination for the winter of 2022-2023, in the context of its proximity to the most popular skiing area in Romania. For the next year, an average occupancy rate of 65% is estimated.

The attraction of the Radisson Blu franchise was based on the desire to contribute to the diversification of opportunities both for the residents of Brașov and for the local industry, through premium tourist services addressed to both the business and leisure visitor segments. We are confident that we will soon become a favourite destination for tourists, but also a landmark for the local business segment, added Ramona Neamtu.