Hidden workforce. Almost a quarter of Romanians work in agriculture, the highest share in the EU 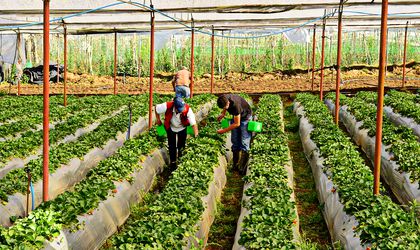 Romanian businesses claim that they struggle to find workers but official statistics may give them a clue where to find new employees. In fact, Romania has the largest share of agricultural employment among the EU member states in 2018, of 23 percent – meaning that almost one out of four employees work in agriculture.

“Among the Member States, the share of agricultural employment in 2018 was the highest in Romania (23 percent of total employment), Bulgaria (18 percent), Greece (11 percent) and Poland (10 percent),” Eurostat said in a report released on Wednesday.

Romania also has a high share for industrial employment, of 30 percent – the 4th highest share, after Czechia (37 percent), Slovakia (32 percent), and Poland (31 percent).

Many experts say that Romania has a large unemployed workforce, hidden in the official statistics under the expression “self-employed in agriculture”, despite claims of a workforce crisis.

However, governments have never imagined effective policies to make these people interested in taking real jobs.

The latest official data consulted by Business Review show that Romania has 1.6 million working-age adults – or 19 percent of total employed population – considered as “self-employed in agriculture”.

However, a traveler to these poor rural areas in Romania would be surprised to discover that few people are interested in taking jobs, as the few existing opportunities mean 8-hour-per-day jobs paid with minimum national wage (around EUR 250).

Some “self-employed in agriculture” Romanians are also temporary working abroad, where they earn enough to live a few months in their home country without working or to make some investment in their own households.

With around 3.5 million Romanians working abroad, many persons in poor rural areas are regularly receiving money from their relatives working in rich Western countries, and this translates into lower interest in taking jobs.

Romania’s workforce is severely unbalanced as more than 1.7 million people work in agriculture with very low productivity, while other 200,000 contribute more to the gross domestic product (GDP) by working in high value-added IT&C sector.

According to an earlier official report, 1.74 million people, representing 20.8 percent of Romania’s total workforce (8.37 million), worked in agriculture at January 1, 2018.

At the opposite end of the scale, 205,900 Romanians work in information technology and communications (IT&C), a high value-added sector.

The 1.7 million people working in agriculture have produced 4.4 percent of Romania’s GDP in 2017, while the 205,900 people working in IT&C have contributed to the country’s GDP with 5.1 percent, according to Business Review calculations based on official data.