More than 23.000 sqm of temporary hospitals were designed by TESSERACT ARCHITECTURE since the pandemic outbreak 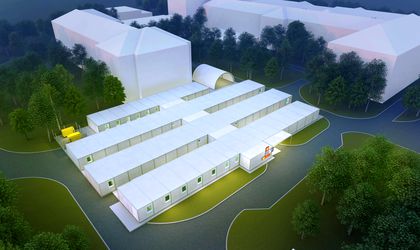 More than 23.000 sqm of functional schemes for modular hospitals made of containers were designed by TESSERACT ARCHITECTURE studio in the last year, since the pandemic outbreak in Romania. These are the first such constructions in our country.

TESSERACT, the single architecture studio specialized in healthcare infrastructure, designed a total of 7 modular hospitals, with 146 beds in the last year, as follows:

Also, TESSERACT designed the concept and the functional scheme for transforming a building of the Bacau County hospital into a 110 beds hospital used for Covid-19 patients.

«With high engagement, creativity and without hesitation we managed to build at a cost starting only 6.000 EUR per container the first modular units in Romania, which are sanitary and epidemiologically viable. This took over the sanitary sistem`s burden in this period and it shows that professional management is possible under a sanitary crisis period,» Raluca Șoaita, founder of TESSERACT ARCHITECTURE says.

The most recent modular hospital designed by TESSERACT is the Modular Hospital at the County Emergency Hospital in Piatra Neamt, an initiative of Daruieste Viata/ Give Life Association. At this moment, the metal structure is almost entirely fixed and next steps are the fixing of the modular units, the hydro isolation and fixing the terrace protection frames.

Further on, instead of leaving thousands of empty containers in the ports, we must think how we can reuse them for the medical system as well as for other sectors – such as the logistic and industrial, the agricultural sector and others, TESSERACT architects say.

«The idea of the modular hospitals, beyond the need to implement these units very fast in the context of the present pandemic, starts from the idea to efficiently reuse, recycle a resource that is forgotten in ports and is considered garbage, The modular hospitals made during pandemic were taken out in the hospitals` courtyards, thus separating the circuits of the Covid-19 patient from the other patients and ofering the hospital the possibility to continue using the hospital for the rest of the patients, without the risk of contamination,» Adds Raluca Șoaita.

TESSERACT ARCHITECTURE is the single architecture studio in Romania and one of the very few in CEE specialized in healthcare infrastructure, which requires particular expertise. TESSERACT team of architects have designed more than 500.000 sqm of hospitals and industrial, production and various other functions facilities up to present.