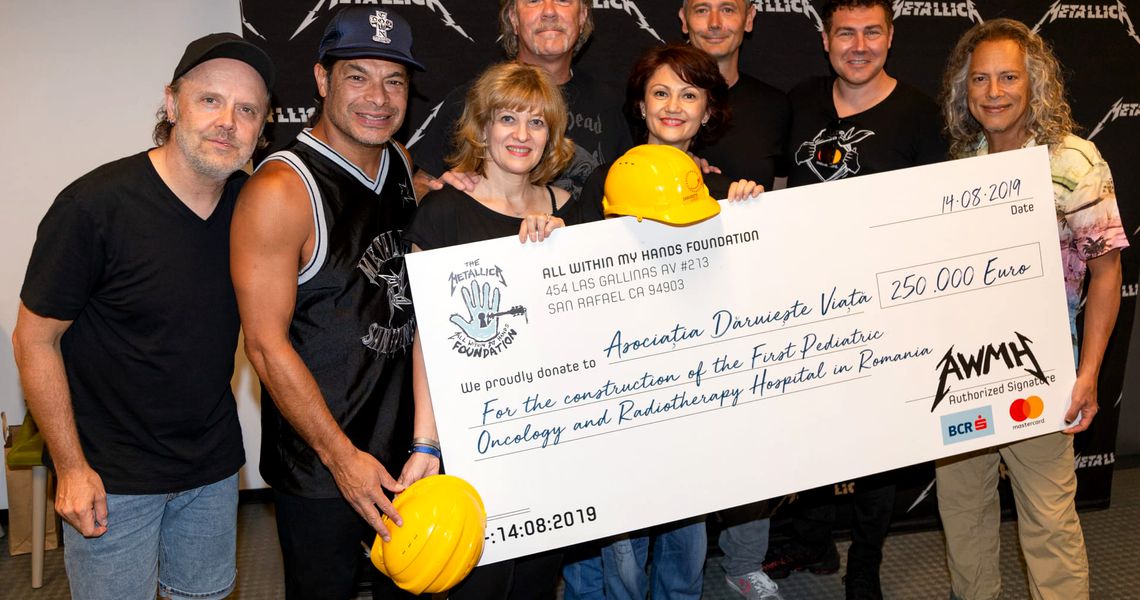 Legendary heavy metal band Metallica announced on Wednesday, the day of its concert in Bucharest, that it would donate EUR 250,000 towards the construction of the first pediatric oncology and radiotherapy hospital in Romania, which is being built by the Daruieste Viata Association without any support from the Romanian state, using only donations from civil society and the private sector.

The donation was made through the All Within My Hands Foundation, founded by Metallica. Along with the band’s own contribution of EUR 50,000, they also donated the equivalent of the Main Sponsor package for their concert in Bucharest – EUR 200,000 – provided by Mastercard and BCR.

The announcement was made on the day of the Metallica concert, held at the National Arena in Bucharest in front of over 50,000 people as part of the WorldWired Tour 2019.

“The donation from the members Metallica has a special significance for our project. On the one hand, their music manages to inspire millions of Romanians and, at the same time, many of them are inspired to contribute to the establishment of the first Pediatric Oncology and Radiotherapy Hospital in Romania, to give cancer patients a chance at life. On the other hand, the donation made by Mastercard, who offered a million euros for the #NoiFacemUnSpital initiative, motivated Metallica to join our cause. We are grateful to all those who make this project possible,” said Carmen Uscatu, president of the Daruieste Viata Association.

With a history of almost 40 years, Metallica is one of the most successful bands of all time, having won nine Grammy Trophies following 23 nominations. The heavy metal band has constantly been involved in supporting major social causes, such as education or fighting poverty and hunger. The band’s members are James Hetfield (vocals, guitar), Lars Ulrich (drums), Kirk Hammett (solo guitar), Robert Trujillo (bass).

Asociatia Daruieste Viata started the project to build the hospital in 2017, relying on private funds. Construction started in 2018. The hospital will be six-storeys high and have a total surface of 12,000 square meters, a new operating bloc, seven operating rooms, and departments will include surgery, neuro-surgery, oncology, haemato-oncology and intensive care. The construction cost is estimated at EUR 16 million, and equipment will cost another 10 million.

So far, over 260,000 individuals and 1,700 companies have donated to this project. The most significant donations were made by OMV Petrom (EUR 10 million) and Mastercard (EUR 1 million).

The Association says it finished building the hospital’s structure in June 2019. The project is currently in the installations phase, with interior design and façade design following soon after. The estimated date of launch is set for the end of 2020. After the launch, the Association will oversee the long-term maintenance of the hospital, which will operate as a public facility as part of the Marie Curie Hospital.

Dozens of children hospitalized at Fundeni Hospital will benefit from a new and modern...