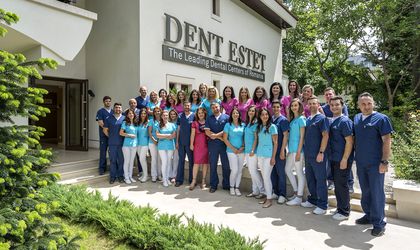 DENT ESTET, the leader of the dentistry market in Romania, reported spectacular business performance in the first half of 2019, reaching a turnover of RON 31 million. The results represent a 39 percent increase compared to the same period of 2018. Over the past five years, the results the company reported for the first six months of each year were between 15 percent and 30 percent higher, year over year.

“To be a market leader, to be able to achieve a consistent financial performance and maintain a high level of excellence in services says many things about the quality of the management and the business perspectives of DENT ESTET. We believe in the development and continuous evolution of the DENT ESTET group, one of the business segments that will increase the most in the following period, both in terms of number of units and national coverage. We are here to support them in this effort,” said Mihai Marcu, President of the MedLife Board of Directors.

The greatest contribution to the turnover came from the implantology and dental prosthetics services. The premium implantology segment increased by 40 percent in 2019 compared to the first semester last year, while the standard implantology reported 68 percent higher results in the first six months of 2019 compared to the same period of 2018. Another segment which contributed to the increased results reported was dental prosthetics, which generated 52 percent higher revenue in contrast to S1 2018.

“DENT ESTET Group is a mature and responsible business and the fact that we report a double-digit growth after 20 years of existence stands as proof. The financial results are backed up by sustained efforts and continuous investment in education. I am glad to see informed patients in our clinics, consciously choosing more and more innovative treatments, provided by an internationally certified medical team. Continuous education is a permanent focus within the company as well, through individual development programs for each member of the medical and non-medical teams,” says Dr. Oana Taban, CEO and Founder DENT ESTET Group.

The accelerated dynamics of the first semester of 2019 was also reflected by the number of new patients: during the first six months of the year, 30 percent more new patients were registered, reaching a total of 5,500, compared to 4,237 in 2018.

At the same time, an important focus of the DENT ESTET group this year has been the development of corporate social responsibility programs through new strategic partnerships with important institutions and companies of the local communities where the group is present. The list of partners over the past ten years, such as Save the Children Association, Open Hearts Foundation, the “Growing Great” program of the Lindenfeld Association, is now expanded with Polisano Foundation, BC CSU Sibiu Basketball Club, Renovatio Sport Club Bucharest, the National Theatre Radu Stanca in Sibiu and the International Theatre Festival in Sibiu (FITS).