BR’s 19 People to watch in 2019 | Victor Costache: My 2019 goal is to drastically cut death rates among Romanian children with heart disease 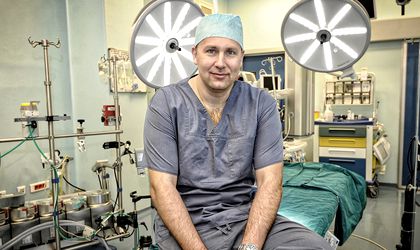 2018 was a record year for the renowned heart doctor Victor Costache. At the end of August, he led a team performing a unique surgery that saved the life of a 77-year-old patient given a 2 percent chance of survival. The Academy of World Records made note of the surgery held in Sibiu.

As he explained, this kind of intervention helps prevent the opening of the thoracic cavity, which would have had more complicated post-surgery effects for the patient. “I believe that any medical problem has a solution, and your vision as a doctor is influenced by the information and experience that you amass,” said Costache, head of cardiovascular surgery at Polisano Hospital, in Sibiu.

He is one of the few Romanian doctors that chose to come back and practice in his native country, after specializing at top universities abroad, and practicing for ten years at leading hospitals in France, Denmark, Germany, the UK and Quebec. He has worked with major figures in the field, such as Prof. Dr. Dominique Blin – the founder of the heart surgery department in France – Prof. Dr. Phillipe Merloz, Prof. Dr. Jean Luc Magne, and Prof. Dr. Christian Letoublon.

In November 2018 President Klaus Iohannis decorated the brilliant surgeon with the Order of Merit, Rank of Knight.

Costache’s grandparents were surgeons and he says he spent most of his childhood in hospitals. He graduated from the University of Medicine in Iasi in 1999 and finished one year of residency in Romania, then decided to move to France, where he started his residency from scratch. He specialized in heart and thoracic surgery and is a member of the French College of Heart Surgery.

He surprised everyone when he decided to return to Romania. “I was very motivated to come back to this part of the country where heart surgery was poor. I recreated a lot of specialties from scratch,” he outlined. “I am very demanding with the people around me and I struggle to find time for my family and hobbies.”

The doctor’s main goal for 2019 is to start a quality national program for treating children’s heart diseases. “Around 1,000 children in Romania die every year of heart disease. We are struggling to include the Polisano Hospital in Sibiu, which is the best equipped hospital for heart surgery in the country, in a national program for children. We have submitted several written pleas to the Ministry of Health and we are in constant dialog with the authorities in order to make this happen,” Costache told Business Review. Such a program would allow all children with heart diseases access to high-quality publically-funded treatments.

“In 2019, we also want to attract additional funding for research into heart disease in Sibiu. In 2018 we attracted around EUR 3 million, through the Next Cardio program,” he added.