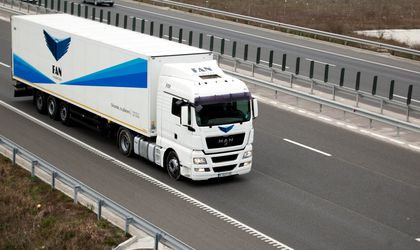 Fan Courier, the leader of the Romanian courier market, is celebrating 20 years of activity, having reached a turnover of EUR 145 million and 6,150 employees. The company’s market share is almost 30 percent, while the entire market reached EUR 500 million this year. This year saw the highest level of investments at the company, with EUR 27.5 million.

The 100 percent Romanian private business consolidates its leading position on the local courier market for the 12th consecutive year, amid doubling of investments and market growth. The company expects to close this financial year with a turnover of EUR 145 million, in line with its initial forecast, in a consolidated market that will exceed half a billion euros this year. In its 20 years of activity on the Romanian market, FAN Courier has made investments of over EUR 135 million and has become one of the major contributors to the state budget, with over EUR 164 million PAID since 2001. Over the last eight years, FAN couriers have traveled nearly as far as the distance between Earth and Mars – over 232 million km.

“A challenging year, a year of investment,” is the phrase that best describes FAN Courier’s activity this year. “2018 was the year with the largest investments in our company’s history: more than EUR 27.5 million, which was over 50 percent above what we had anticipated. We have completed the largest investment in a warehouse – the second one in Stefanesti and one of the largest in the logistics technology, the sorting strip in the new HUB,” said Adrian Mihai, one of the company’s three founders.

Investments in the fleet, storage capacity, high performance technology and staff training are constant in the company’s business and serve the needs of customers and the market, and are also the things that have kept the company as a market leader.

Growing investments over the years

In the 20 years since its inception, FAN Courier founders have approved investments of over EUR 135 million – EUR 8.5 million more than the company’s turnover in 2017.

“The hardest time was the one that has us determined to become the best,” says Neculai Mihai, founder of the company. “In 2007, because of investments that we had postponed and on the backdrop of an unprecedented increase in shipments at that time, we were in a jam. We then had to pay damages to customers until the next summer.”

In the past 10 years, the courier company has increased its investment level by 14 times, and for 2019 plans include project continuation, over EUR 15 million having already been budgeted for this.

“Without investments, a company cannot survive in the medium and long term – and this is a lesson I learned the hard way,” added Adrian Mihai.

This year, an important investment component was technology and innovation. The sorting strip of the new HUB in Stefanesti accelerates the level of automation of the current activity, amid the staff crisis facing the entire local economy.

In the first half of the year, the company announced the inclusion in its fleet of the first electric cargo-bike, intended for use in the exclusive pedestrian areas of Bucharest and later also in other major cities. In order to streamline the relationship with the end customer, the company has introduced a new smart ticketing application this year, which allows the synthesis of all their wishes in one place. With this tool, customers can record notifications or requests directly from SelfAWB, make changes to the AWB after picking up the shipment, and change the payee’s data, recipient’s phone number, payee, etc.

“The great advantage of this solution and the reason we have developed it, in fact, is to avoid customer waiting times being taken over by an operator,” Adrian Mihai explained.

Expanding the team with its own students

For 2019, FAN Courier maintains its growth forecast, with estimates of going 15 percent above this year’s results, which will amount to about EUR 145 million.

“We appreciate that the courier market is maintaining its growth trends, and e-commerce remains the main engine of our industry. Black Friday, our biggest discount campaign, is constantly demonstrating Romanians’ appetite for online shopping. This year, the campaign exceeded the initial estimates, but we believe that, as far as our role in the supplier-client relationship chain, this year, we have met the quality standards we have promised,” said Felix Patrascanu, founder and managing partner of FAN Courier.

The three founders say the company’s financial results are determined by the team’s performance. FAN Courier has become one of the largest employers in Romania in recent years.

In November this year, the company had 6,150 employees across the entire FAN network, a 7.33 percent average increase nationwide. The number of employees in Bucharest represents 46 percent of the total team and their number will increase by another 100 by the end of this year.

In 2019, because the company’s plans include continuing the development of HUBs in the country, the team will grow by another 10 percent, with blue collars – cargo handling, couriers, professional drivers and call center staff.

The company tried to compensate for Romania’s workforce crisis by opening the FAN School this year.

“The FAN School is a functioning project, we have completed the construction and implementation of the mechanisms within the organization. We have finished the first pilot project in which more than 200 people have signed up, and the first trainee who has completed the course and obtained a driving license has recently joined our team of couriers,” Felix Patrascanu explained.

Among the problems Fan Courier has faced over the years is the workforce.

”The generally unpredictability, wage increases, the healthcare and justice crisis – these are the reasons that have led to a real labor force crisis, as people prefer to go to work in other countries to get rid of these problems,” says Felix Patrascanu.

He admits that during the times when there were people waiting to be hired, the company pay too much attention to the reasons why employees leave, but when the work-force outside the company disappeared, the company tried to find out their needs and wishes.

”Surprisingly, wages were not their first demand. A friendly workplace was first on the list, transportation was second and the salary was third. We tried to cover these needs, even the request to transport employees to the Old Center of Bucharest after work, as it is the place where they could have a beer,” says Patrascanu.

Since the average age of their employees is 30, there is a change in the mindset. The young are not keen to ”own a house and have a car in the garage” – they care more about things like having a good job with understanding supervisors and a friendly environment.

”We have increased the wages, by only 20 percent this year, but we still cannot compete with the wages in the Western countries, even if otherwise we use the same technology and products, from PDA to the cars”, says Patrascanu, showing that there is a strict correlation between productivity and wages. ”One courier ships, on average, 70 packages in one day. In Germany, they deliver 250 packages. But the difference is not made by the technology, is made by the infrastructure and by the confidence customers have in e-commerce and in people in general. For example, if the customers are not at home, the courier can leave the package at the door. Also, the payments are made online by card, so couriers doesn’t waste time handling money,” says Patrascanu.

The lack of confidence is seen as the biggest problem in the Romanian business environment, next to the poor infrastructure.

The courier market will keep growing in the next years, but the growth rate may not remain as high as it is now since the e-commerce market is only at around 10 percent of the whole consumer industry.