A new F15 for US Air Force? Boeing hopes so 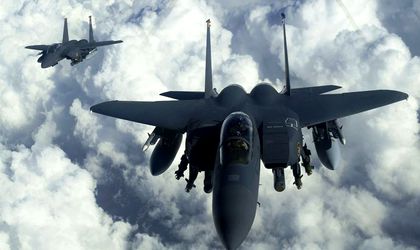 Boeing is pitching the US Air Force a new F-15 fighter jet using the same business strategy that convinced the Trump administration to buy more Super Hornet warplanes for the Navy.

Dubbed the F-15X, according to defenseone.com, the new version of the venerable jet offers more modern flight controls, cockpit displays, and radar, according to military and industry sources with knowledge of the plan. The plane would also pack a lot of firepower, carrying more than two dozen air-to-air missiles, the most of any US Air Force aircraft.

Boeing officials declined to explicitly confirm their efforts to sell the F-15X, except perhaps obliquely:

“We see the marketplace expanding internationally and it’s creating opportunities then to go back and talk to the U.S. Air Force about what might be future upgrades or even potentially future acquisitions of the F-15 aircraft,” Gene Cunningham, vice president of global sales of Defense, Space & Security, said.

The Air Force has not purchased new F-15s since placing a 2001 order for five F-15E Strike Eagles, a two-seat version that can bomb ground targets and shoot down other aircraft. The original F-15 first flew in 1972, and many of the Air Force’s current air-to-air Eagles entered service in the 1980s. Many of them are older than the pilots who fly them.

Unlike its successful Super Hornet pitch to the Trump administration last year, the F-15 pitch has not made its way to White House, according to sources with knowledge of the project. When Trump visited a Boeing commercial factory in South Carolina in February 2017, reporters traveling with the President spotted then-Chief of Staff Reince Priebus with a Boeing white paper that compared an advanced version of the Super Hornet to the F-35 Joint Strike Fighter made by rival Lockheed Martin.

A mix of aircrafts

Air Force leaders say they are currently evaluating their mix of aircraft. Among the options being considered are new versions of F-15s and F-16s, according to one Air Force observer.

American allies Israel, Saudi Arabia, Singapore, and South Korea fly tailored versions of the F-15. The newest member of the Eagle club is Qatar, which ordered 36 aircraft last year and has an option for 36 more. Boeing is also pitching the F-15 to Germany, which wants to replace its Tornado jets.

The F-15 was supposed to be replaced the by the stealthy F-22 Raptor — considered the top air-to-air combat fighter. Despite objections from top Air Force generals, then-Defense Secretary Robert Gates ordered an end to F-22 production in 2009. The final jet came off of Lockheed Martin’s Marietta, Georgia, production line in 2012. In all, the Air Force purchased 187 Raptors, far less than the more than 750 originally planned.

Foreign versions of the F-15 have received newer technology not around when the American planes were built. Over the years, U.S.F-15s have received upgrades to their radars and cockpits, but the Air Force recently canceled an effort to add electronic jammers to its older F-15Cs.

Boeing has long pitched new versions of the Strike Eagle to the Air Force and international customers. In 2010, the firm pitched the Silent Eagle — an F-15 with special coating and canted vertical tails — that executives said could better evade enemy detection. In 2015, it pitched an upgrade to the F-15C — the aerial combat version — that would allow it to carry 16 air-to-air missiles.

At times, Boeing has argued that upgraded versions of their planes could come close to matching the advanced stealth, sensors and electronic warfare capabilities of the F-35 at a fraction of the cost.

Now the savings might not be as much as the price tag of the Air Force F-35 has been dropping annually. The Pentagon on Sunday announced it has a handshake agreement with Lockheed Martin for a new batch of 141 F-35 Joint Strike Fighters. The Air Force version of the plane cost about  USD 89 million per copy, according to a Reuters.