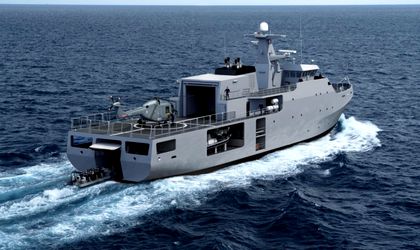 Damen has won a contract from the Tunisian Ministry of Defense to build four Multi Service Offshore Patrol Vessel (MSOPV) 1400 patrol vessels in 2016.

The third OPV, Hannon, commenced initial sea trials in the Black Sea on June 26 and was completed on July 27, one day before the deadline. On August 11, the ship has begun navigating towards Tunisian port Bizerte.

On June 25, the Tunisian Navy commissioned its second MSOPV 1400 build in Galati at the port of La Goulette.

Powered by two Caterpillar engines, with a total power rating of 7060 kW, the nominal top speed is 20 kt, but this limit has been exceeded on sea trials with speeds approaching 22 kt.

Syphax (P 611), the second of four MSOPV 1400s on order for the Tunisian Navy, was delivered to Tunisia the previous month after completing construction at Damen’s shipyard in Galati, Romania, on May 2.

First-of-class Jugurtha was delivered in early March. The last of four vessels is scheduled to be completed in October.