Crossroads: Offering quality of life to Romanians in their home country is still a long way off 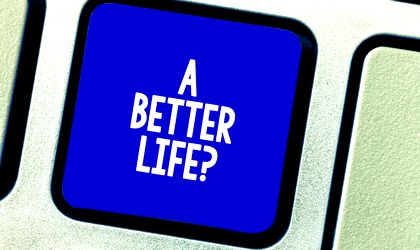 Romanians continue to leave their country at a worrying pace and many local experts try to find the real drivers behind this trend. Some entrepreneurs and politicians think they have the answer: beyond earnings, people leave mainly because they search a better quality of life for them and for their children.

Quality of life is a complex term, as it refers to many aspects of human life and human aspirations. It includes human and natural environment, quality of infrastructure of any type (from schools and hospitals to road and public transportation), work and career opportunities, and the chances to achieve dreams during a lifetime.

Despite the fact that it is frequently used, quality of life tends to be an issue in developed or at least high middle-income countries, where most people are not stressed by basic needs such as ensuring food or accommodation.

In fact, quality of life is somewhere in the upper part of Maslow’s hierarchy of needs, meaning that people living in developing countries would at some moment consider it as a normal need.

In these countries, quality of life has also become a political issue as politicians understand that offering a good level of quality of life could be the winning ticket at the electoral lottery.

Romania seems now, for the first time in decades, mature enough to address this issue of rising importance among its inhabitants.

It is no wonder that this issue becomes so important now in Romania, as millions of people have already emigrated to wealthier countries and have experienced the quality of life offered there.

But other millions of Romanians who remained in their country have had the opportunity to travel and compare the standards of living in different countries and now put pressure on authorities to improve the situation in Romania.

Hot subject on the public agenda

This year, the concept of quality of life has finally entered on the public agenda in Romania, and local entrepreneurs are the first to openly discuss about this issue.

Cristian Erbasu, the CEO of Constructii Erbasu, said this year at Business Review’s Working Romania Event that he had expected more Romanian construction workers to come back to the country and to stay here to work, but that this was not the case.

He spoke about the need “to create better working conditions, because those thinking of coming back to Romania don’t just think about the salary, but also about the other conditions and quality of life.”

From the perspective of quality of life, Romania’s cities still have a lot to improve to compare with the cities from the Western World.

In Mercer’s 2019 edition of the “Quality of living city ranking” survey, Bucharest has moved down two places coming in at 109 out of 231 ranked cities. For the tenth year in a row, Austrian capital Vienna topped the ranking, followed by Zurich (Switzerland), while joint third place went to Vancouver (Canada), Auckland (Australia) and Munich (Germany).

But other cities in Romania became to really improve the quality of life. Bucharest, despite its huge financial resources and high earnings, is affected by poor public management, incompetence, and stunning corruption.

In some cities in Transylvania, where urban life emerged earlier and was historically more developed and sophisticated, the quality of life is much higher and the situation improves every year, helped by EU funds.

Cities like Cluj, Sibiu, Oradea or Timisoara are attracting people and develop, while cities in other parts of the country offer low quality of life and offer little hopes to their residents – and they lose people at high pace.

But during the last few years, investors are also increasingly betting on quality of life as a competitive asset.

In fact, office development in Romania is adapting to the preferences of new generations of employees and changing the very idea of its offer. Developers now design projects for complex living, providing good quality of life and urban regeneration rather than just work premises.

This change in office concepts can already be seen in Romania, where office buildings are now being replaced with more evolved concepts.

The first such mixed-use project is Palas Iasi, which was opened in 2012 and is now considered a landmark for Romania. But another major project has recently opened on the opposite side of Romania, in Timisoara – Iulius Town.

Other such projects are just in infancy but such developments could change the face of Romanian cities and boost the quality of life during the next decade.

The subject has also entered on the political agenda this year as some political leaders think that the subject is already important for some parts of the society.

In November, the presidential election offers us a good perspective to see the targeted voters of the candidates in the Maslow’s hierarchy of needs.

At least two candidates target those interested in improving the quality of life through their slogans: USR leader Dan Barna  – “Happy in Romania” – and the current president Klaus Iohannis (“For a normal Romania” – where normal could be read as “western-like”.

Old-fashioned leaders bet rather on lower needs in Maslow’s hierarchy, like security, earnings or a sense of social importance – like “Close to every Romanian!” of PM Viorica Dancila.

These different targets show the two sides of Romania, one developed and sophisticated in the big cities and western part of the country, and the other poor and disconnected from economic growth, ruled by brutal corrupt leaders.