Corina Cretu, European Commissioner: Romania will benefit from a budget 8 percent higher than the current one 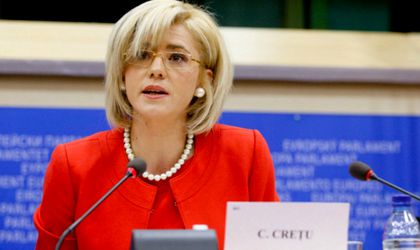 Corina Creţu participates in the conference “EuroImpact – Impact and Results of Cohesion Policy in Romania. Experiences in accessing funds and implementing funded projects”, organized by the European Institute of Romania in Bucharest.

“Fortunately, the Cohesion Policy has remained at the center of the vision of the future of the European Union,” she said and spoke about one of the principles of European funding.

“In the end, to convince my colleagues in the European Commission that we have to go back to the formula Berlin (…) rely almost 80 percent on the gross domestic product per capita formula. poor countries – Bulgaria, Romania, Greece – have a plus of 10 percent,” said Cretu

She addressed the Deputy Minister for European Affairs, Victor Negrescu, at the conference, on this issue.

“In our proposal of the European Commission, Romania will benefit from a budget that is 8 percent higher than the current 2014-2020. I hope, Mr Negrescu, that negotiations between the Council and the European Parliament will maintain these principles already I am convinced that you will fight in the Council to keep these figures for our countries,” said the European official.

At the same time, she spoke of the need for an agreement on the multiannual financial framework.

The European Commissioner also referred to the risk of not reaching such an agreement.