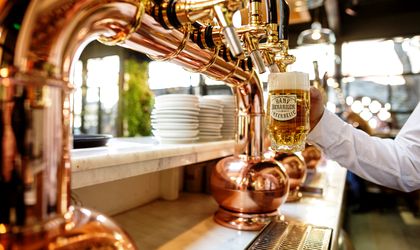 The City Grill Group reached a turnover of EUR 37.7 million in 2018, recording an increase of EUR 4 million compared to the previous year. The hike is organic, driven by customer growth, loyalty through Out4Food, and investments made throughout the year in the group’s restaurants.

With an increase of 11 percent from 2017, the City Grill Group remains the most important Romanian HoReCa groups, generating a turnover of EUR 37.7 million in 2018. 40 percent of turnover comes from loyal customers of restaurants in the Group, who use the Out4Food loyalty system.

The average value of the bill in 2018 in City Grill Group’s restaurants was about RON 100, and the number of customers grew by 10 percent compared to the previous year – the main engine of the growth in turnover.

Premium locations were also the most sought after, including for events: Caru’ cu Bere, Pescarus, Hanu’ lui Manuc and Hanu’ Berarilor. In fact, according to a study conducted for City Grill in 2018, Caru’ cu Bere is the favorite of people in Bucharest, who appreciate the quality of food and services, but also the atmosphere and restaurant layout. Caru’ cu Bere has also become a reference for international tourists who enjoy traditional Romanian food, a welcoming environment and a little lesson in Bucharest’s history.

For 2019, the City Grill Group predicts an increase of at least 10 percent, going over a new financial threshold of EUR 42 million.

Investments: Looking for space for development

The expansion of Hanu’ Berarilor – Casa Soare, where the City Grill Group builds an annex that will act as a hall of events and cuisine, alongside the refurbishment of the Pescarus Restaurant’s interior, were the major upgrades made in 2018 in existing restaurants.

The value of investments in 2018 amounted to EUR 2.3 million, and for 2019 budgeted investments amounting to EUR 3.5 million.

“In 2018 we had budgeted almost double the amount of investments, but we preferred not to expedite expansion and to continue searching for ideal spaces for the development of the restaurant network. We continue to focus on the Romanian cuisine and we want to create gastronomic destinations with identity that are suited to our business philosophy and our audience. We have ongoing discussions both in Bucharest and other major cities of the country, and this year we want to open two new restaurants,” says Daniel Mischie, CEO of Group City Grill.

In 2018, City Grill Group stepped up its investment program in the human resource development to mitigate the effects of the major staff shortage in HoReCa. The main projects in this segment are Academia City Grill, which prepares accredited staff for hospitality, as well as the start of the dual education project with Mihai Bravu high school in Bucharest, involving 60 students from two classes.

“2018 has been marked, more than ever, by the labor shortage in our field, but we have seen strong signals from other industries as well. We hope that our actions to raise the level of training, the standard of employee benefits and education will be complemented at market level by other players so that Romania can be a top country on the hospitality map,” adds Mischie.

City Grill has over 1,350 employees in restaurants and cafes operated and is the most important Romanian employer in the restaurants industry.