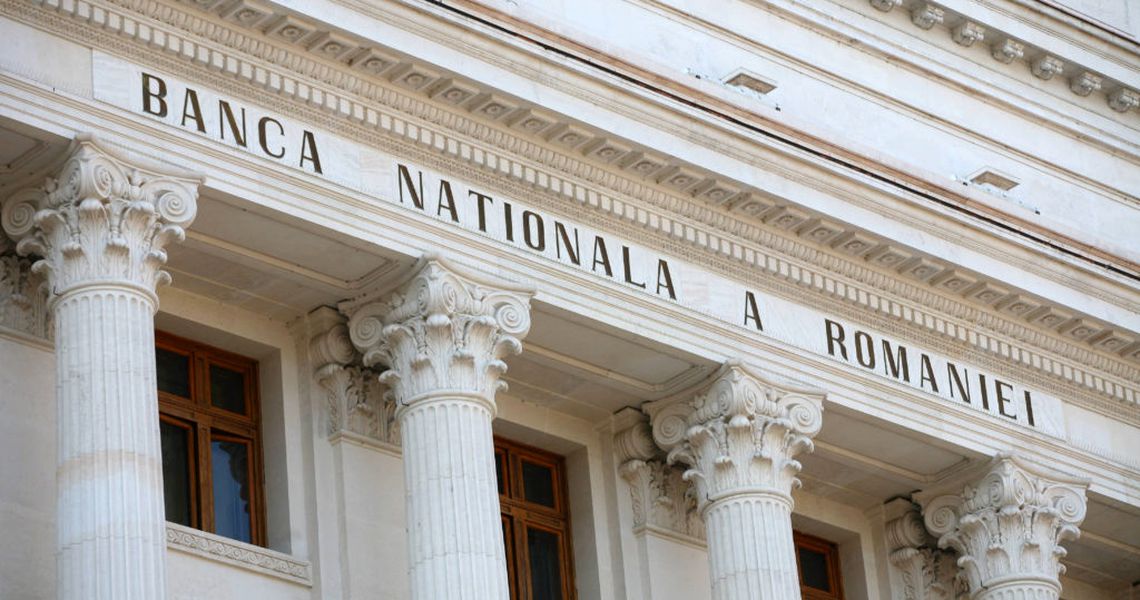 The National Bank of Romania (BNR)’s monetary policy meeting on July 4, 2019 found that the acceleration of Romania’s economic expansion was stronger than anticipated in the first quarter of 2019, while inflation remained at 4.1 percent, significantly above the 2.5 percent target. At the same time, BNR Board members found the economy’s external imbalance to be a cause for concern, together with the higher tensions occurring on the labour market.

“The annual inflation rate had remained flat at 4.10 percent in May, significantly above the variation band of the target. In the first two months of Q2 as a whole, it had continued to move in the opposite direction of forecasts, exceeding slightly the 4.03 percent level seen in March. The rise had been primarily triggered that time by a step-up in core inflation and, to a lesser extent, by the hike in VFE prices, whose impact had been partly offset by a slowdown in the annual dynamics of tobacco product prices, fuel price and administered prices. The annual adjusted CORE2 inflation rate had posted a faster growth in line with forecasts, climbing from 2.7 percent in March to 3.2 percent in May – a peak since September 2011,” according to the minutes of the monetary policy meeting.

The Board members found that the advance could be attributed to developments in services prices – only partly ascribable to the tax levied on telecom companies and the slight depreciation of the RON against the euro – as well as to the dynamics of processed food prices, which were somewhat influenced by the increase in some international agri-food prices.

“Several Board members deemed that the evolution of core inflation indicated rising demand-pull and wage cost-push inflationary pressures, in line with the size and strengthening trend of the cyclical position of the economy and the sustained pick-up in labour costs. Additional signals were seen to come from the upward trend in the annual growth rate of industrial producer prices on the domestic market for consumer goods, which had gained momentum over the last months, and from the increase in GDP deflator in 2019 Q1; reference was made to short-term inflation expectations, which, according to some surveys, had recently continued to undergo upward adjustments,” the document reads.

In Q1, according to the Board, economic expansion had a stronger-than-anticipated acceleration – to 5 percent from 4.1 percent in 2018 Q4 –, given an unanticipated rebound in its quarterly dynamics, implying a likely larger advance in excess aggregate demand than the forecast for that period.

“Household consumption again became the main driver of economic expansion, in line with expectations – amid a strong acceleration of purchases of goods and services –, followed, however, again by the change in inventories, whose robust contribution over the last four quarters was difficult to put down to unequivocal economic behaviours and hence enhanced the uncertainties associated with economic growth,” the BNR Board members said.

The contribution of gross fixed capital formation unexpectedly returned to positive territory, owing solely to the upturn in new construction works. The BNR noted that in this context, the contribution of domestic demand to GDP dynamics rose notably, whereas net exports made a considerably larger negative contribution, in the context of a slight increase in the dynamics of imports of goods and services, concurrently with a slower growth rate of exports.

“Consequently, the trade deficit widened considerably faster than in the same year-earlier period, also triggering a deepening of the current account deficit in annual terms, despite the improvement, in that period, in the primary and secondary income balances. In that context, Board members deemed that, in view of its size and evolution, as well as given its financing structure, the economy’s external imbalance was increasingly worrisome,” the minutes read.

BNR Board members expressed concern about the high labour market tensions, underlining the recent successive peaks in the number of employees in the economy and the record low level that the ILO unemployment rate had tended to touch over the past months, as well as firms’ hiring intentions.

“The persistence of major difficulties facing companies in staff recruitment caused the latter to increasingly focus on digitalisation and automation – inter alia with the aim to increase efficiency – or to resort to foreign labour force, as suggested by the recent contraction in payrolls in industry, especially in the automotive industry, as well as by the findings of studies and specialised surveys,” the BNR said.

Wage pressures are therefore expected to remain elevated, at least in the short run, considering the annual two-digit increase recorded in April too by average gross nominal wage earnings, as well as by the average real net wage earnings, albeit slightly decelerating from Q1.

In April, the annual pace of increase of unit wage costs in industry had also remained at a double-digit level, in the absence of clear productivity gains. Some Board members noted that the scarce labour force was becoming an obstacle to sustainable economic growth in the new EU Member States, also owing to emigration.

Board members pointed out the persistence of main ROBOR rates significantly above the policy rate May through June, at values only marginally lower than those recorded in April, but also the normalisation of the average interest rate on interbank transactions, which had shifted during that period slightly below the policy rate, amid the BNR consistently mopping up – via deposit taking operations – the excess liquidity having re-emerged on the money market.

“Reference was also made to the modest advance in the remuneration of new time deposits April through May, but especially to the steep declines seen in May by the variable interest rates on households’ new housing and consumer loans respectively, most likely as an effect of the coming into force of the IRCC at 2.36 percent. It was remarked that, starting 1 July, the IRCC level had risen suddenly to 2.63 percent and that it would remain constant during Q3. In that context, the uncertainties generated by the introduction of such a benchmark index for loans to consumers were reiterated, as well as its possible implications for the monetary policy transmission and stance and, ultimately, for the entire policy framework,” the BNR document reads.

The Board members also discussed the sharp downward correction witnessed by the EUR/RON exchange rate towards end-May and at the beginning of June, in tandem with developments in the region, amid signals on the forthcoming easing of the Fed’s and the ECB’s monetary policy stances, conducive to an increase in the attractiveness of investments on those markets. The subsequent slight downtrend of the currency pair – due to the higher interest rate differential versus the euro area and to the stance of central banks in the region – was also underlined, and it was deemed that a potential steepening of that trend would be conducive to risks to inflation developments over the medium term through the adverse impact on the current account, already deteriorating swiftly. Some Board members cautioned that – in the context of the twin deficits – a shift in the exchange rate evolution could not be ruled out, particularly in the event of a change in the risk perception vis-à-vis the local economy/financial market.

“The annual growth rate of credit to the private sector had seen its decline come to a halt, remaining relatively constant in April and May, at a level only slightly below the Q1 average. The annual pace of increase of the domestic currency component had stuck to two-digit readings, but had continued to decelerate slowly, mainly on account of loans to households, whose dynamics had nevertheless benefited from the sizeable contribution of new consumer credit, which had reached – in terms of monthly volume – a new historical high in May. The rate of change of the foreign currency component had marginally re-entered positive territory in the same month, for the first time in seven years, solely as a result of developments in the non-financial corporations sector. The share of the leu-denominated component in total private sector credit had remained on an upward trend, reaching 66.2 percent,” BNR noted.

As for future developments, Board members concluded that, according to the latest information and analyses, the annual inflation rate would probably remain above the variation band of the target over the short time horizon, with some small fluctuations, and follow a trajectory compatible with that shown in the medium-term forecast published in the May 2019 Inflation Report, which saw it at 4.2 percent in December 2019 and 3.3 percent at end-2020.

“The action of supply-side factors might be less inflationary over the months ahead than in the previous forecast, given the unexpected cut in natural gas price as of July, as well as the relatively slower dynamics of fuel prices. It was remarked that near-term prospects for oil prices remained uncertain and that the recent/future developments in VFE prices, as well as the fiscal and budgetary measures effective this year generated primarily upside risks to the near-term inflation outlook, the context being therefore relevant in terms of the implications for medium-term inflation expectations. Some Board members were of the opinion that a better-than-expected performance of domestic agricultural output on certain segments was possible, with effects on the future dynamics of food prices,” they said.

On the other hand, according to the BNR Board, the action of fundamentals would probably be slightly more inflationary over the short time horizon than previously anticipated, given the somewhat stronger pressures expected to be exerted by aggregate demand, wage costs and short-term inflation expectations.

“Looking at the premises of the cyclical position of the economy, Board members deemed that economic growth would probably slow in Q2 and Q3, but would remain relatively more alert, following its step-up above expectations in the first quarter, and with quarterly dynamics anticipated to decline gradually, inter alia amid a less favourable performance of agriculture in Q3. According to the assessment, such an outlook implied a further increase in the positive output gap during that period to values slightly higher than forecasted in May.”

The assessments regarding the external imbalance and its short-term outlook referred both to the fast dynamics of domestic absorption and non-price competitiveness issues of the Romanian economy and to the weakening trend of euro area and global economic growth, as well as to the heightened risks thereto induced by the trade war and by the uncertainties surrounding Brexit. Reference was also made to the monetary policy conduct of the ECB and of other major central banks, as well as to the probable stance of central banks in the region, even amid faster inflation in those countries.

Against that background, Board members again called for a balanced macroeconomic policy mix to avoid the overburdening of monetary policy, with undesired effects in the economy. Moreover, the importance of an adequate dosage and pace of adjustment of the monetary policy stance was reiterated, with a view to anchoring inflation expectations and bringing the annual inflation rate back into line with the inflation target, while safeguarding financial stability. At the same time, it was deemed that, given the macroeconomic conditions and the domestic and external risks, maintaining strict control over money market liquidity was of the essence.

Under the circumstances, the BNR Board unanimously decided to keep unchanged the monetary policy rate at 2.50 percent, while maintaining strict control over money market liquidity; moreover, the deposit facility rate was left unchanged at 1.50 percent and the lending (Lombard) facility rate at 3.50 percent. In addition, the NBR Board unanimously decided to maintain the existing levels of minimum reserve requirement ratios on both leu- and foreign currency-denominated liabilities of credit institutions.