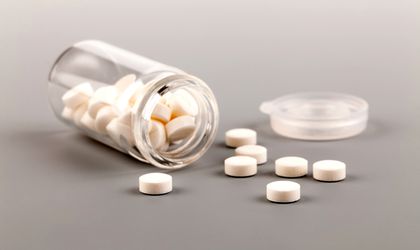 According to results of the Pharma & Hospital Report, Cegedim estimates that in the period between April 2017 and March 2018, the volume of medical drugs sold to patients in Romania went up to 588.2 million packs, a 6.3 increase compared to the previous 12 months, and the number of treatment days also increased by 7.7 percent.

The value of medicines distributed to Romanian patients in the 12 months ending March 2018 reached RON 14.6 billion at distribution prices, an 11.8 percent growth compared to April 2016-March 2017.

In Q1 2018, the total volume of medicines distributed to patients was 154.2 million packs, a 6.6 percent growth q/q, supported both by the retail channel (+6.6 percent) and the hospitals (+7.2 percent). By segments, the volume growth rates were 6.9 percent for Rx in pharmacies and 6.2 percent for OTC in pharmacies.

In Q1 2018, the total value of medical drugs released to patients was RON 3.78 billion, a 17.3 percent growth q/q, particularly due to CVR contracts which had the largest growths. Segment-wise, the growth rates were 21.2 percent for Rx in pharmacies, 13.2 percent for OTC and 5 percent for hospitals.

For the main therapeutic groups, the past 12 months have registered volume increases above market average for drugs for the digestive system and metabolism (9.2 percent), the nervous system (7.7 percent) and for the respiratory system (7.3 percent). The groups under market average were systemic anti-infection drugs, antineoplastons and immunomodulators, muscle-skeletal drugs and cardiovascular drugs.

The top 10 pharmaceutical corporations in terms of volume over the past 12 months are the same as in the previous quarter, as the ranking is led by Sanofi, followed by Sun Pharma and Servier, Krka, Antibiotice, GlaxoSmithKline, Alvogen, Novartis, Gedeon Richter and Biofarm.