BR STORY. Italian king of coffee machines takes root in Transylvania and supplies the whole world from a Romanian village 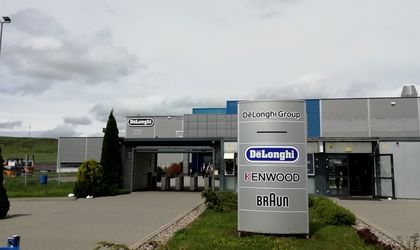 Italian group De’Longhi, the world leader of espresso machines, has moved most of its production to Jucu, a village located near Cluj, the biggest city in Transylvania. From here, the group supplies most of the world with automated espresso machines and hand mixers, and the percentage of local production integration exceeds 70 percent.

In its huge factory in Jucu, 2,400 Romanians from nearby villages work to produce espresso machines and hand mixers.

For a visitor, the interior of the factory has an unexpected look: every worker wears disposable caps and gloves, almost like in a pharmaceutical factory.

But managers explain that dust and particles are a threat for a business now based on hi-tech machines and high precision engineering. “We are now the second biggest company in Cluj county by turnover, and we have 100 percent Romanian employees. Well, almost 100 percent, because I am the only foreigner working here,” said Massimo Paroniti, the Italian manager of the factory, during a press trip to the site.

The group owns well-known brands like Kenwood, Braun and De’Longhi and the factory it operates at Jucu has 65,000 sqm.

The fall of Nokia

Few people know that the history of De’Longhi in Transylvania is associated with a well-known business case study: the failure of Nokia.

The Finnish phone maker started production at the Jucu plant in February 2008, but ceased all activity in the fall of 2011 due to huge problems it had registered on the global market.

Thousands of people from the region lost their jobs following the closure of the Nokia factory in a difficult period marked by the financial crisis.

But the region remained attractive for other foreign investors due to its qualified workforce and facilities from local authorities in industrial parks like Tetarom near Cluj.

De’Longhi, the world leader in espresso machines and hand mixers, decided to move most of its production to the former Nokia factory.

“I worked for Nokia before working for De’Longhi – and at Nokia, the local factory was almost entirely based on assembling parts produced abroad, while the local integration was close to zero. There was little value added there, even if the turnover was much higher, of EUR 1.6 billion at its peak,” a Romanian manager said.

“Now, at De’Longhi, we have a local integration rate of around 70 percent for espresso machines and 85 percent for hand mixers, and this means a lot of value-added here, a lot of contracts for local companies,” he added. “If we look at fully automated espresso machines and hand mixers, 85 percent of our sales in 2018 are products manufactured in our Jucu unit and we are glad to see that the Romanian public has a special appreciation for locally produced appliances,” points out Peter Ferluga, commercial director of De’Longhi Romania.

Most of the production at Jucu is exported to countries such as the UK, France, Germany, Australia, etc., but in 2018 the Italian group also opened a local subsidiary in Bucharest to sell its products in Romania.

“Before opening the local subsidiary in Romania, we were a 100 percent export company,” Massimo Paroniti said.

But managers underline that De’Longhi came here to stay and it is now part of the local business – with its good and bad aspects.

“We need 3 hours to cross Cluj county with our trucks. We need infrastructure,” the factory manager points out.

The Jucu plant produces sophisticated products and has managed to integrate the hand mixer engines unit from Germany.

“The biggest challenge was to convince the Germans that we are capable to transfer the engine unit here – and we proved that we could do it,” a Romanian manager told journalists with a proud gesture. In fact, the espresso machines produced at Jucu integrate the highest technology available on the global market.

“You’ll be surprised that an automated espresso machine is like a car from the technological point of view. It has more than 700 different spare parts and it is so complex that even some Chinese who tried to copy it didn’t succeed,” a local engineer said.