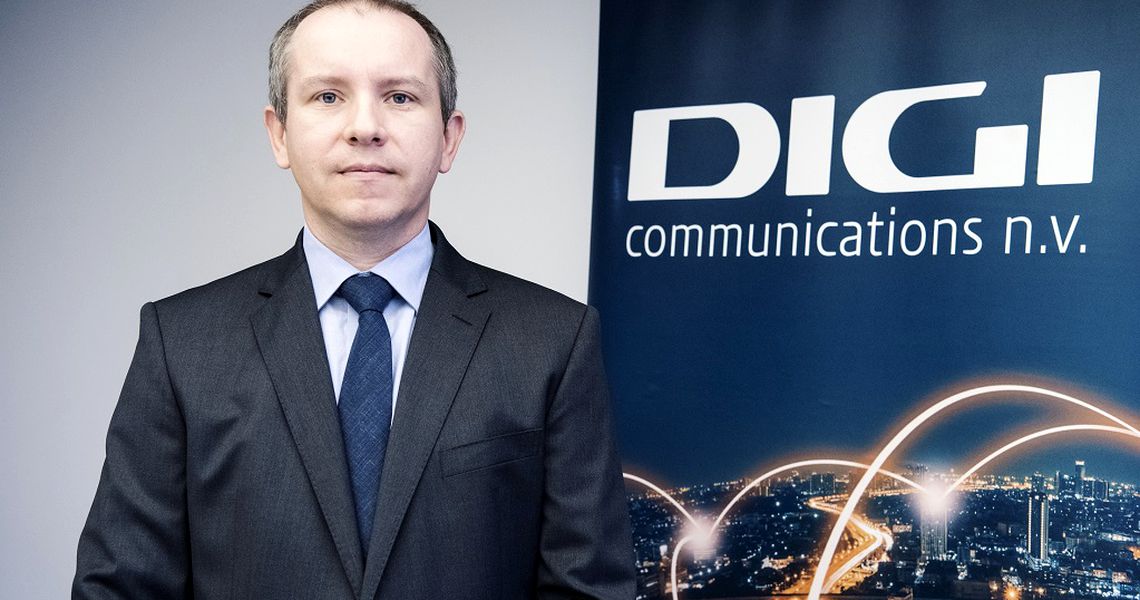 2018 turned out to be a positive year for Digi Communications, despite the turbulent environment. With revenues and profit up by 13 percent, the company stuck to its investment plan for the period. BR talked to CEO Serghei Bulgac about the business’s recent evolution and the company’s plans.

For the most part, 2018 confirmed our expectations for both the financial and commercial performance. The telecommunications company’s consolidated revenues exceeded the threshold of EUR 1 billion last year, up by 13.3 percent compared to the previous year, which is a reason for pride for our teams in Romania, Hungary, Spain and Italy. Another key indicator for us and the telecommunications industry is EBITDA (operational profit), which in our case grew by almost 13 percent to EUR 324.6 million. The good results come as our number of customers increased by 1.7 million on the four markets where we operate, and reached almost 15 million at the end of last year. We want to keep our rhythm of growth in 2019.

What is the value of investments in recent years? How much of the Romanian network is covered with fiber optics and what investments have been made in the 4G?

Over the past 11 years, we have invested nearly EUR 2.5 billion in the most revolutionary technologies in electronic communications, focusing in particular on increasing the penetration of the fiber optic network in Romania and Hungary. In 2018, investments were up nearly 15 percent over 2017, reaching EUR 280 million. The fiber optic network currently covers about 73 percent of households in Romania and 47 percent of those in Hungary. Currently, in Romania, the DigiMobil 3G network covers 99 percent of the population, while the 4G network has reached 61 percent. In Hungary we plan to launch mobile services this year.

Your share price on the Bucharest Stock Exchange has been declining since your shares launched. What do you think is the reason for the negative trend? The bond issue of January 2019 was supplemented; how do you explain the success of the bonds while the stock price has dropped?

The Digi Communications listing was received with enthusiasm by the market, but the further development was less predictable, a situation that is too little related to the company’s results and activity, although they rose. Throughout 2018, the stock market evolution of Digi shares was predictable if we look at what is happening in other capital markets in the region and in Europe and especially in our industry. We would have liked to have had a more stable economic and political environment, especially in recent months, to help capitalize better on the good results achieved at operational level. Legislative and political uncertainty has left its mark on the environment as a whole and has had repercussions, including on the stock exchange.

On the other hand, the company enjoys the confidence of investors in international markets, and this is evidenced by the recent bond issue, which attracted EUR 200 million, compared to EUR 125 million, the amount we offered in the initial announcement. Digi has attracted more than EUR 1 billion through bond issues on international markets since 2013. It is a success for a Romanian company, as an entrepreneurial initiative, in a very dynamic and competitive field.

How is business going in the foreign markets where your company is present? What are the plans for these markets?

In Hungary, growth was supported by the integration of Invitel, a local operator whose acquisition was completed last year. Revenue generating units (RGUs or subscribers) for the Digi branch (including Invitel) increased from 500,000 subscribers to 700,000. In the fixed internet segment, Digi had 470,000 subscribers at the end of 2017 and it reached 700,000 RGUs on December 31, 2018. In the landline segment, the number of users almost doubled, reaching 700,000 subscribers from 379,000 a year ago.

Spain and Italy also had four growth quarters, registering around 1.5 million subscribers by the end of 2018, up 36 percent on the previous year. Digi Spain has positioned itself as the market leader for MVNOs (virtual mobile phone operators) over the past year. The last month of the third quarter also marked the launch of fixed services on the Spanish market. For the time being, in these markets, the main objective is to continue to grow, both inside and outside the Romanian communities, and to achieve a robust reputation for newly launched services.

What projects did the company launch last year and what are the projects selected for this year?

Last year we continued consolidating the Romanian market, maintaining our leadership position on the fixed TV and internet cable segments, completing the acquisition of Invitel, in Hungary, launching fixed services in Spain and the recent bonds issue on international markets, that I have already mentioned, successfully completed and attracting EUR 200 million from investors. The launch of mobile services in Hungary and the continued expansion of the fiber optic network and the 4G network in Romania are two of the major projects along with the increase of synergies between the two countries and the preparation of frequency auctions.

How is the company handling employee retention during this time when labor is limited? What is the average salary within the company and what benefits are offered to employees?

Fortunately, the company has a very good retention rate, and its human resource needs are mainly provided by internal company mobility.

The salary level is in line with the industry as a whole, with small variations based on field specialization, seniority and experience. In 2018, according to the National Statistics Institute, the average net salary on the telecommunication market ranged between RON 2,800 and RON 6,000 net for an engineer. Salaries within the group fall within this range, with the differences mentioned above and the fact that remuneration differs according to position and post.

Our pay policy is prudent, deriving from the company’s strategy – accelerated growth, top quality services at the most affordable prices, tailored to customer purchasing power, service-driven convergence, proprietary content, and value-for-money complementarity of electronic communications services. Therefore, our remuneration policy is also guided by the evolution of purchasing power on the main market, Romania, with a focus on ensuring the right relationship between the wage burden and rewarding employees’ efforts.

Do you plan to participate in the 5G auction?

Since December 2018, the economic and legislative environment has been marked by ever growing unpredictability. There are still many unknowns about the general climate, both in Romania and on the markets of interest for our company, and this makes it impossible to give a short answer. In fact, the whole market is in “wait and see” mode, as are we.

A glance over last year’s financial results shows that mobile communications represents about a third of total revenue. In the future will you focus on expanding these services? What are your plans for fixed internet and cable / satellite TV?

Recent developments in the field of electronic communications show an increase in the public appetite for mobile services and high-speed connections, which allow access to complex content. We expect our audience to be on the same path, and consequently investment and development projects will take into account the convergence of services and the growing need for high-speed internet and unlimited connectivity. As our slogan says, we are “unlimited” to customer aspirations and our plans will follow their needs.

We maintain our position from January on these tax measures. Government Emergency Ordinance 114/2018 is unfavorable to the development of Romania’s electronic communications and energy sector, as the tax burden on operations in these sectors significantly increases without proper consultation and without any serious justification, thus restricting investment and affecting customers.