Gamification in the auto industry: Ford creates an interactive ‘Escape Room’ game for its Mustang Mach-E 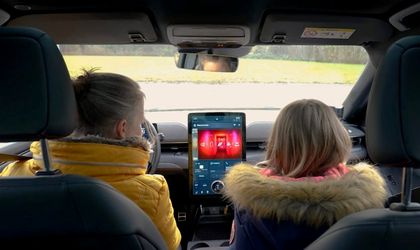 Ford creates an interactive ‘Escape Room’ game for its Mustang Mach-E that tasks players with solving clues and following directions to win. The app-based game uses specialist hardware to interface with vehicle controlling features like air conditioning, speakers and electric seats to enhance immersion. The technology used in creating this game has the potential to be developed in the future for a real aftermarket application.

In recent years, Escape Room games have grown in popularity, pitting teams of players against the clock as they try to solve clues and escape from a themed room. Now, Ford has taken that concept and applied it to the all-electric Mustang Mach-E, with the game-controlling elements of the car to create an interactive experience.

The spy-themed concept game takes players through a secret mission to deliver a package. Audio prompts for tasks are given over the vehicle’s speaker system, with the electric seats, hands-free tailgate, air conditioning system and headlights amongst the elements that are either activated by the game or used by the player as a trigger at relevant points.

No features outside of the heaters and speakers are controlled if the car is in motion and, unlike Escape Room games, the players can exit the vehicle at any point, when safe to do so, without forfeiting the game. The game is installed on an iOS device that interfaces with the vehicle using Apple’s CarPlay and an internally developed piece of hardware and software.

“This is a bit of fun that has a serious side, as it shows just what could be possible with the technology we have in cars today,” explained Carsten Starke, technical expert interior materials & customer experience, Ford Research & Advanced Engineering, Ford of Europe. “Having the ability to create interaction between vehicle and driver could open up new ways to explore other possibilities in the future, like an interactive owner’s manual or even driver coaching.”

The game is purely a working concept at the moment, developed by Ford of Europe with input from the Software Enablement & Research team in Ford’s Emerging Technology & Innovation group and the IOT group based at Palo Alto, California. It was developed to showcase how gaming could help people to get more familiar with the functionalities of their vehicles.

It could even offer a glimpse into the future of applications that might entertain or educate drivers and passengers during downtime at charging stations, or perhaps even while riding in future autonomous vehicles.