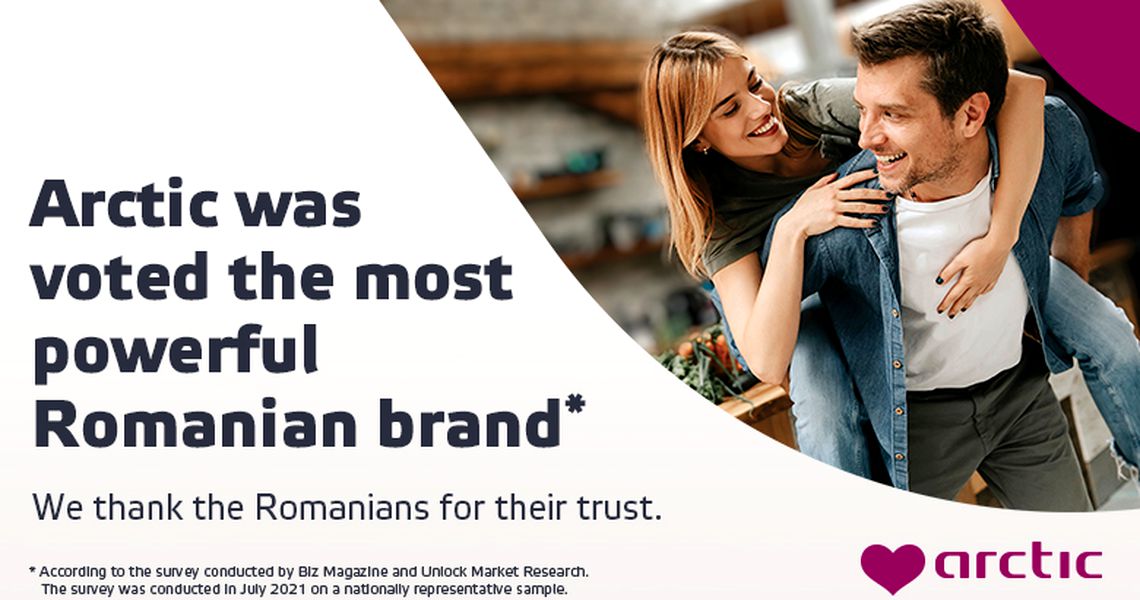 Arctic is the leading domestic brand, according to “Romania’s most powerful brands” study conducted by the research company Unlock Market Research for BIZ, in July 2021, on a nationally representative sample. It is the second year in a row when the brand ranks first in the study, a reconfirmation of its market position, given that Arctic is also the top-selling home appliances brand in Romania, according to the GFK study that analyzed sales between January and September 2021. At the same time, Arctic is the best-known home appliances brand in the country, an Ipsos study that took place between January and June 2021 showed.

Arctic’s focus on innovation and added value has been a catalyst for its continued success. As a brand Romanians have known and loved for over 50 years, it has been constantly adapting and evolving in order to best respond to customers’ needs. Arctic boasts a full range of energy-efficient appliances, as environmental awareness is at the heart of the company. Its mission is to offer technologically innovative solutions that make lives easier, while also advancing a sustainable and healthy lifestyle. For instance, the built-in electric oven, which comes with Steam Assisted Cooking and 3D Cooking technologies, which guarantee perfect meals, making the most of your efforts in the kitchen.

Another example is the Antiallergic + with ExtraSteam technology included in Arctic washing machines and which offers extra care and hygiene by using steam for deep cleaning. The washing machines bear the Made in Romania label, being produced in Ulmi, in one of the most modern factories in Europe, and the first Industry 4.0 production unit in Romania, where over 200 robots work side by side with employees. Inaugurated two years ago, following a total investment of over EUR 153 million, the Arctic factory integrates the latest artificial intelligence technologies, machine learning, automation processes and robotic technologies, which allow an increase in productivity by up to 30%, with a minimal impact on the environment. In fact, the Ulmi factory has in its portfolio an extensive number of accreditations as a green production unit, being the only one in Romania that received the LEED Platinum certification, the highest recognition of performance in the field of sustainable production. The Ulmi plant is currently working to expand production capacity to 2.2 million washing machines per year. Major investments are also underway at the Arctic factory in Gaesti, where refrigerators are produced. More than 10 million euros will be invested by the end of this year to modernize the plant, in particular to increase the degree of automation and quality control. This adds to the over 170 million euros already invested by the company over the last years.

At the same time, as a brand that puts people first, Arctic has been involved in the communities in which it operates. The company has donated during the pandemic appliances worth RON 1.5 million in order to support the health system in its fight against COVID-19, the latest having reached Grigore Alexandrescu Children’s Hospital. The company has also launched an urgent call for action among its business partners in order to help the Gaesti Hospital secure the funding needed in order to be able to purchase oxygen supplies. Together with its suppliers, Arctic raised RON 290,000 to provide the hospital with the necessary oxygen for the two months.

Arctic is one of Romania’s top employers and its main home appliance exporter – 80% of the total production reaching markets in over 68 countries.