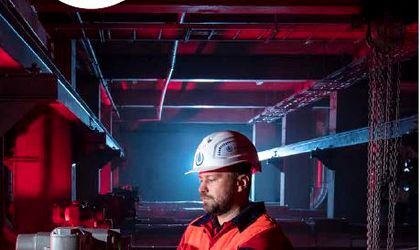 Apa Nova has launched a facelift process of its visual identity and a new company positioning, following the modernization and the re-configuration of the business model which occured over the last years.

From the position of a public utility service operator, Apa Nova saw a need for a perception study at the beginning of 2018. The conclusions of the market research were that, beyond the high spontaneous awareness (97 percent), the main impact the company has over the community is the fact that it contributes to the city’s development (78 percent) in a progressive manner.

In line with the company’s objectives for the following period of time, including being recognised as modern and innovative with a dynamic connected to the current rhythm of the economy,  a decision was made to align Apa Nova’s image with the new trends from a visual point of view as well. This decision therefore came as a natural step in the transformation and digitalization process started two years ago.

“As it proves daily in its activity, Apa Nova is going through a modernization and renewal process, with higher and higher efficiency and performance, both from the quality of services point of view, as well as the increasingly modern processes and an client-oriented organizational culture,” said the company’s officials, referencing this important stage in the company’s evolution, from an image stand point.

During this time, the company implemented important actions for a better handling of the water resources, but also for Bucharest’s own development. From the desire to make these initiatives known, as well as to highlight its role in the city’s everyday life, it has launched a dedicated communication campaign, with the purpose of rebranding its visual identity.

Porter Novelli Romania, alongside the creative agency DDB Romania, developed the facelift itself from the element that defines the company’s main activity: water.

“The inspiration for the new positioning is water itself: always moving and adapting. It’s continuous. It flows. We want to speak about Apa Nova as an organism that adapts in the same way that water does – to technology, situations, trends, and to the consumers’ needs. Therefore, consumers will be more aware of the modernization, the processes, the necessary work that lies behind a glass of water. Therefore, we position the company as being one that applies philosophy of water and not just one that <

Alongside the company name, the new logo includes a symbol that projects a drop of water in a pipe section. The headline „Apa ta, responsabilitatea noastra” (Your water, our responsibility) will help communicate the fact that Apa Nova is always responsible for the water it supplies, a responsibility that each of the company’s employees holds every day, behind which lies the passion for performance and innovation.

Since 2000, Apa Nova (part of the Veolia Group) has had the responsibility of handling the water resources, treating and distributing water towards the consumers, the evacuation of the used waters and of the meteoric waters in Bucharest. The investments so far surpass EUR 458 million.