Analysis: The number of people aged 65 and over in Romanian cities has increased by 51 pct in the last 20 years 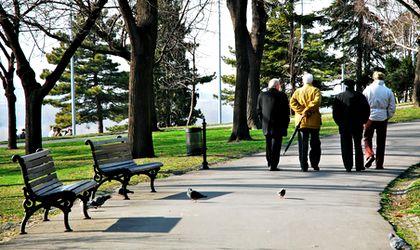 The Romanian population is getting older and it’s moving from rural to urban areas. An analysis by EY Romania shows that over the past five years, the share of young segment (under 15) in the total population has decreased gradually to reach 14.8 percent in 2018. On the other hand, the number of Romanians aged over 65 has exceeded the number of those under 15 starting in 2014.

The average age in Romania has increased by about 4 years in the last two decades, reaching 41 in 2018. During the same period, the highest percentage of elderly among the Romanian urban population was one in six people being over 65 in 2018.

Cities are often perceived as the place of the young, but the reality is that many Romanian cities now have an aging population. How does the age of the inhabitants influence the evolution of a city?

Are there really more young people in urban areas?

Compared to the national average, the average age of inhabitants in Romanian cities with more than 100,000 inhabitants is higher, 42.3, versus 41.2 across Romania. And the average age is even higher for larger cities, although they usually benefit from the existence of anchors such as various institutions and universities, hospitals, or cultural objectives that all represent an attraction for young people.

On the other hand, secondary cities offer some of the dynamism of their larger counterparts, but at a lower cost. This situation has created an exit mainly for young people in large metropolitan areas looking for lower life costs, avoiding crowding and cheaper access to entrepreneurial resources. In this context, it is important to note that the average age of the rural population is lower than that recorded in urban areas (40.7 rural vs. 41.6 urban) in 2018.

The young towns in Romania

The city with the youngest population in Romania is Suceava, with an average age of 39.5 and only one out of eight people aged over 65. It is followed by two cities in Moldova: Iasi (39.7) and Botosani (40.2).

Cities in Romania with a high average age

At the opposite end, Braila has the oldest population, with an average age of 44.1 years. With a fairly large margin, it ranks second in the top of the aging cities of Brasov (43.6 years), followed closely by Ploiesti and Constanta (43.3 years). These cities record the highest values ​​in terms of the number of people over 65 (Braila, Constanta, Ploiesti – 18 percent, Brasov – 17 percent of the total population). Cities with a large number of people who reach retirement age are tourist towns, whether we are talking about the mountain area – Brasov or the sea side – Constanta.

The values ​​recorded by the population aging index support the above conclusions – the cities of Constanta and Brasov ranked first in terms of the number of elderly people registered per 100 young people – 137 persons, compared to the national average of 110 persons.

The capital is in the top 10 cities with the highest age in Romania, ranking 9th with 42.6 years, at a very small difference from the national average (42.2). Although with a fairly high birth rate of 9.7 births per 1,000 inhabitants, the capital is still losing human capital due to emigration.

A younger population can bring benefits such as attracting investment, so companies can find it easier for the right employees. However, cities also have to offer other opportunities for young people, such as affordable cultural facilities, schools and homes.

Cities with older populations have different benefits and challenges. Older people, but still active, tend to be more productive and may have higher wages because of their experience and abilities. This leads to increased disposable income that can be used in shops, bars and restaurants. But it is also true that cities with older people face higher demands on health and social care.

Thus, as their populations continue to differentiate, cities will become more and more concentrated on the needs of their own inhabitants.

“As in other countries, the cities of Romania face demographic challenges with challenges related to the development and sustainability of infrastructure, population health, welfare and housing facilities. High costs, pollution, climate change and traffic growth already have real effects on the urban population, and continue to increasingly impede the attractiveness of large cities and their ability to grow, as has been found across the world,” said Adriana Tabac, Marketing and Communication Director, EY Romania.