China is already on a recovering trend after the Covid-19 outbreak. A similar outcome could be expected for Romania, mainly driven by eCommerce, after the outbreak peak is surpassed

The business environment in China was the first hit by the Covid-19 epidemic, but the fast decrease of new cases in the past weeks brings hope for recovery in the second half of the year, with a positive impact on the real estate market as well. Based on China’s evolution, a similar outcome could be expected in Romania too, mainly driven by eCommerce, after the outbreak peak is surpassed and the number of new cases drops, Colliers International consultants predict. Moreover, the current situation can bring growth opportunities for certain industries including segments of the real estate market.

With much of China’s office economy having run via remote working during the first quarter of this year and although many have been affected, 85 percent of the interviewed landlords indicated tenants have no plans to downsize their leases, based on a Colliers International survey conducted among companies in the real estate segment from China. Even so, tenants’ expansion plans in 2020 are nonexistent for most respondents (92 percent).

Some sectors such as online shopping, online education, online gaming, pharmaceuticals and healthcare seem to be benefiting from the situation and will boost office leasing demand amid the Covid-19 driven lockdown in mainland China, which can be a reference for potential recovery after the epidemic in other parts of the world as well. In this context, Colliers consultants believe that landlords should strive to appeal to these sectors and adjust their tenant mix. For business sectors like IT and healthcare, which were less impacted in China, or which may even be seeing increasing sales, tenants are expected to try to negotiate favorable long-term leasing deals.

About 59 percent of the interviewed landlords in China believe rents will remain stable, according to Colliers International’s survey, while 29 percent expect rents to face downward pressure. In terms of vacancy rate, 40 percent of the landlords believe vacancy will remain unchanged. Overall, 34 percent of the surveyed companies believe their business will remain unaffected by coronavirus this year, while 19 percent say they have already been negatively impacted and 26 percent expect some sort of impairment to their business. However, small and medium-sized enterprises (SMEs) have been more affected, with 54 percent declaring that the coronavirus negatively impacted their business. 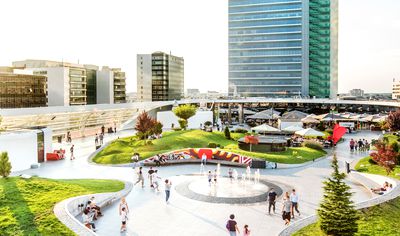 “There are some similarities between the Romanian and the Chinese office markets, like the early adoption of work from home and the huge impact on regional cities’ economy. On the other hand, in China there is a big chunk of the state owned landlord market and 80 percent of the companies are Chinese. Thus, there was a bigger focus on the fast recovery of the economy and reduced risks to relocate their business to other countries,” said Sebastian Dragomir, Partner & Head of Office Advisory at Colliers International Romania.

A rebound in China retail, expected in Q2

The epidemic affected tenants in the retail segment dramatically in China, with revenues falling by 60 -100 percent year over year since the outbreak. Almost all segments were affected, Food and Beverage operators having the most difficult position. However, about 40 percent of companies expect a rebound in the retail segment in Q2, according to Colliers International’s survey in China, and 24 percent in the second half of the year, as consumers tend to resume retail spending based on current signals from the market. About 12 percent of retailers declare they are unaffected, and supermarkets are generally unaffected, especially supported by sales through their online platforms. Some clothing and children’s retail and online education in China are even seeing an increase in consumer base and revenue, which in part comes as a result of online advertising and discounts offered to customers.

Retail landlords are expected to establish e-commerce channels with and for their tenants, a measure which is expected to benefit the overall sales. In fact, this may actually be an opportunity for some brands or businesses to expand quicker and recover faster, gaining market share at the expense of rivals, according to Colliers International’s consultants from China.

Companies and especially food & beverage tenants are expected to expand more into online, which would form a new development strategy in the future and also expand the customer base. To counter losses recorded during the outbreak, 52 percent of companies in China have indicated willingness to expand their online footprint and cooperation with existing online retailers is also an option, according to Colliers International’s survey.

“The local retail market has been of course affected after the trading of most of the non-essential retailers was stopped. This is why tenants have to be well prepared for the moment when we will be back to our life as we know it, in order to recover as fast as possible. That means suitable stock for the end user demand, hygienic measures to be taken very seriously and omnichannel marketing to be continued,” says Simina Niculita, Partner & Head of Retail Agency at Colliers International in Romania.

Vacancy rates of logistic spaces expected to decrease in 2020

The Covid-19 outbreak has also strained most manufacturing and service industries in China. However, eCommerce is mostly benefitting from the situation, state 47 percent of logistics and eCommerce companies from China that responded to Colliers International’s survey. Overall, 65 percent of companies feel that eCommerce sales will be flat or even grow in 2020 and 31 percent of them even predict at least 15 percent year over year growth. Although some industries suffered short-term damage during the epidemic – like luxuries, clothing, cosmetics and electronic products or home appliances, a favorable outcome is expected in certain areas including medical, pharmaceutical and fresh food products. The growth is supported by consumers developing the habit of buying fresh food online and by senior citizens embracing online consumption, a trend that can be observed in Romania as well.

”In our market it has already become visible that consumers have gained more confidence in online shopping during this period and it is expected that such activities will become ordinary for an important segment of the population in the future. Therefore, the infrastructure needed for online stores should grow and, implicitly, warehouses needed to supply the online orders will also have to gain,” says Laurențiu Duica, Partner & Head of Industrial Agency at Colliers International.

Manufacturers might turn to  local/nearby solutions for raw materials – adds  Laurențiu Duică -, so that they no longer depend on imports from distant countries, including from China. Overall, the effects on the logistics market in China are expected to be reflected in the value of rents. About 43 percent of companies participating in Colliers International’s survey expect rents to decrease on account of slowed logistics operations, declining consumption in non-essential areas, delayed manufacturing and potential rent-free periods of discounts given to tenants. On the other hand, 40 percent of companies believe the opposite will happen due to an increase in eCommerce demand for specific products, which will drive the overall market upwards. As a result, 73 percent of companies believe vacancy rates of logistic spaces will decrease or at most will remain the same as prior to the Covid-19 outbreak.