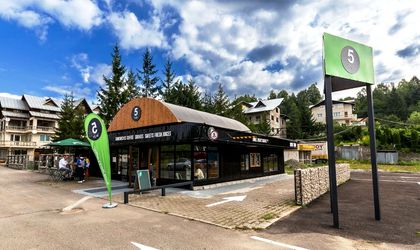 The 5 To Go coffee chain, one of the biggest in Romania and Eastern Europe, has opened its first drive-through and the first and only pit stop of its kind on a national road – DN1 Bucharest – Brasov.

The shop was opened at KM 103 of the DN1 in the town of Nistoresti, an area well-known for traffic jams that happen almost every weekend during holiday seasons, the most lovable Romanian brand of cafes, 5 to go, comes up against the problem with a drive through thru drive but also a generous seating area inside the location.

“Whether you are just passing and you want to buy a coffee quickly, whether you want to make a stop, a pit stop, lasting, the new 5 to go franchise launched on DN1 Bucharest-Brasov at KM 103 is an opportunity for disconnection and relaxation,” says Radu Savopol, co-founder of 5 To Go.

The 5 To Go Drive Thru in the Nistoresti area will also shortly offer its customers the opportunity to charge their electric cars by installing a charging station.

“After a brief analysis of the market and the area, we came to the conclusion that a charging station for cars is more than necessary on DN1 Bucharest-Brasov. As the 5 To Go policy is aimed at environmental protection, we decided to install this power station, thus welcoming the responsible consumption of energy and natural resources,” says Savopol.

With this new release, 5 To Go marks a new first on the HoReCa market in Romania, as the new location is the first coffee shop with a drive through a national road (DN1) and at the same time 5 To Go has become the first coffee chain with 85 shops in the country.