Marius Persenea, Iulius: Urban regeneration can chenge the face of the city and make a better life for its citizens 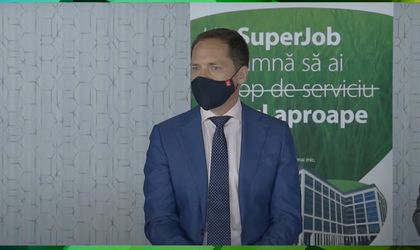 Urban regeneration and building new projects that can change the face of the city and the life of its citizens are the best ways to increase the quality of life in the big cities. The best examples of that are Iulius group mixed projects, as Marius Persenea, Chief Operating Officer at Iulius said at Riding Cities. Smart Future event organized by Business Review. Marius Persenea has 20 years of experience in national and international financing, and since 2017 he is part of the IULIUS team. Currently, he holds the position of Group Funding Manager, being also involved in optimizing the operating activity.

There is a set of good practices that all Iulius projects is following and are amongst the first on the Romanian market as it was used on projects that started 20 years ago. ”The projects in Iasi and Cluj are already mature and include a real community. There are over 17,000 people working in these projects,” says Marius Persenea.

Using this set of practices allowed Iulius to have a ”privileged position” today, as the entire European Union is turning green. ”We are in the position of the student that studied all year and is very well prepared for the exam. As we all know, this pressure of sustainable, renewable, green is higher than ever. It is enough to look at the basic theme of the EU in this administrative exercise, a theme that is part of the Green Deal. I am convinced that all the players in the market are completely connected to this phenomenon,” explains Persenea.

The mixed projects are the best way of building communities. Incorporating as many functions as possible, from office areas to retail, adding public administration functions, all are a way of rising a smart city and the community that goes with it. ”All these functions are important because we consider that in this way we respond to the needs of the citizens, who are able to solve all their problems in the same area. They can go shopping, work, solve administrative problems, do sports and go out to dinner with the family; everything in the same place. In addition, we added elements of education, like kindergardens and schools,” says Marius Persenea.

Having everything in walking distance relieves the pressure from the town’s infrastructure. „Moreover, we have also build recreation parks in the projects we have, so we are now the largest owner of public parks in Romania, with a total of 150,000 square meters. Parks made so that people want to spend their free time in these parks. In Timisoara we also have a lake, which is not treated with any kind of chemicals and that attracted wild ducks. This made children very happy, especially those who no longer have grandparents in the countryside, are happy to see wild animals in the middle of the city,” says Iulius COO.

The Group managed to help the city’s infrastructure in more than one way. In Timisoara Iulius build a four-lane tunnel, donated to Timisoara City Hall that solved an important road junction. ”And we also build a park on top of the tunnel, so not only the traffic flow problem was helped, but also a desideratum of us, that green is important,” says Persenea.

”We talk about urban regeneration, which we also call urban recycling because the term is more appropriate as it means giving back a space of the city that is no longer used by the citizens,” explains Persenea.

The community is the most important element of urban regeneration. All the projects in this area must raise the quality of life in several ways. ”First of all, through architecture, cities need a face, an identity. I noticed that people needed, especially in a pandemic, a space to go out, a space to walk,” says Marius Persenea, also showing that it is important to add the community to the Public Private Partnership, a concept that has been taken into consideration for a long time, but which failed to achieve its true value.

Education is also important, which is way ”Iulius Group has been encouraging education through internship courses and we have also developed Asset Management courses with the University of Iati. It teaches how to manage such projects. We have investments of over EUR 1 billion in Romania, some of which are already 20 years old, and if not managed correctly would lose their value over time. That is why we want to encourage education and train people who can manage such projects.”

”The law of supply and demand is valid anywhere and anytime. If there are projects that are considered viable by the community and the public administration, then they will be developed.”