Alexandru Nen, Telekom Romania: We are working on many energy efficiency projects for the urban area 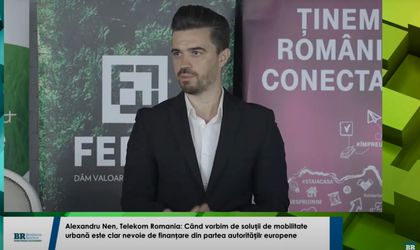 The smart city will not develop without smart projects that usually come from the private sector and are financed by the public authorities, local or European. And the projects for energy efficiency are among the most important, as Alexandru Nen, Solutions Architect Smart City & IoT at Telekom Romania showed at Rising Cities. Smart Future event organized by Business Review.

There is a big number of smart solutions developed around the country and just as many in Telekom Romania portfolio for smart cities. „The portfolio of smart solutions is a strategic development within the company. When we started to develop them, we took into account the funding that the European Union has in this sector and we saw many projects created later on this funding,” says Alexandru Nen.

Most of the projects are made for energy efficiency, like smart lighting in the big cities. But on the rise are projects on electro-mobility, like the one Alexandru Nen is working on. „One of the projects I am working now is to increase the number of electric charging stations, which is very important because the growth of electric cars is huge. As statistics shows, there are about 3 million people moving to cities every week at the global level; this increases the pressure on the urban area. The phenomenon is a good thing because it rises the standard of living for citizens, but we need to come with solutions to keep the urban area clean and efficient in term of energy,” says Alexandru Nen.

Telekom Romania focused on projects that can self-sustain later, but needs funding for implementing. The way to do that is to make sure that the projects are among those that are viable for funding from the European Union or from local authorities. ”At the moment we have three projects in implementation for electric charging stations, in Râmnicu Vâlcea, Galați and Giurgiu all with financing from the Environmental Fund. The projects are at the beginning and we hope to expand. If I’m not mistaken, the Ministry of Environment has allocated EUR 40 million for this type of project for the county municipalities and we hope to see funding for the rest of the localities as well, not only municipalities,” explains Alexandru Nen.

Another important thing when talking about projects and strategies is to collect enough data to define the problems. ”All the data, from the number of electric vehicles to the charging stations, it is important to have so that we can interpret now and in the future. That is why we have developed a platform for interconnecting all these solutions, for capturing and making available this data for future programs, so that decisions can be made based on certified data, so that we no longer have projects that are not successful due to lack of clear data from the beginning,” says Nen.