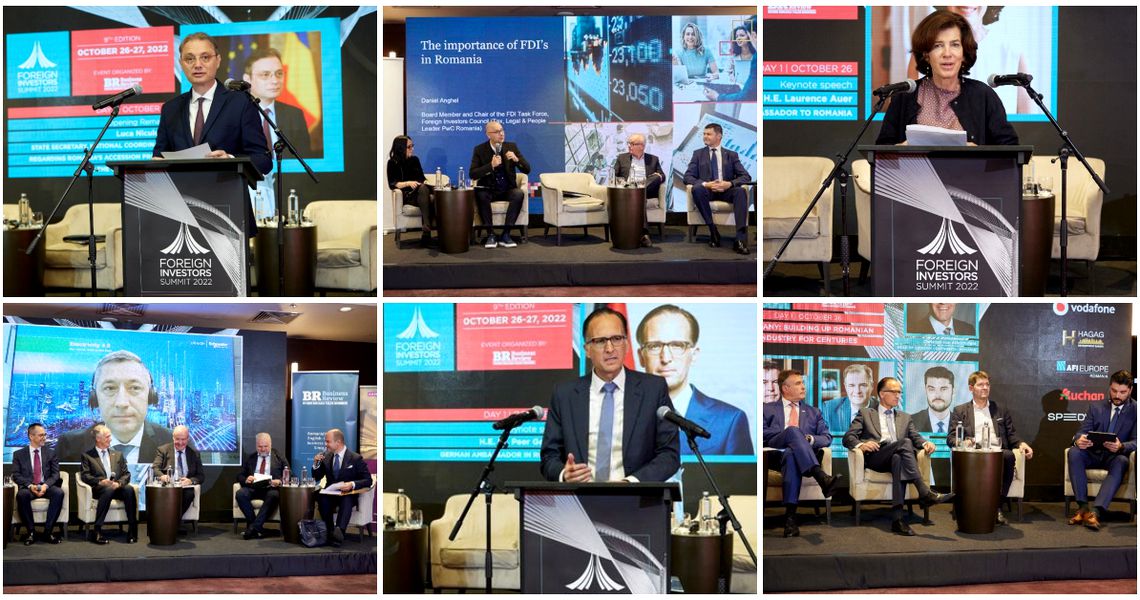 Romania’s FDI inflow reached EUR 8.9 billion in 2021, the highest value since 2009. However, the country continues to rank last in the Central and Eastern Europe region in terms of FDI per capita. Last year, the net flow of foreign direct investment (FDI) continued on the positive trend recorded in the last part of 2020.

Although the state of alert imposed by the authorities as a result of the persistence of the SARS-CoV‑2 pandemic was in place throughout the year, foreign investors were able to adapt to the new economic conditions, resuming investment projects that had been suspended at the beginning of 2020 due to the economic freeze caused by the pandemic and even initiating new projects. “Investments are a central issue of the OECD accession discussion, as well as the adoption of non-discrimination and transparency principles, the liberalisation of capital flows, and the setup of a transparent and open regime for FDIs. Romania’s OECD accession is a strong signal for investors and Romanian businesses about its commitment to adhere to the highest standards. Foreign investors will find an even more favourable and predictable business environment in Romania starting with the pre-accession period,” said Luca Niculescu, State Secretary and National Coordinator of Romania’s OECD accession process, in his keynote speech at the 9th edition of the Foreign Investors Summit, Business Review’s landmark event. He added that an improved country rating—which will have a major positive impact on Romania’s capacity to access international financial markets—and the country’s increased involvement in global decision-making and economic practices will be some of the most noticeable results of Romania’s accession to the OECD.

Daniel Anghel, Board Member and Chair of the FDI Task Force at the Foreign Investors’ Council, said that Romania’s efforts should not simply be aimed at attracting any FDI, but be focused on the types of FDI that create economic value, stimulate the local business environment or target sectors with high added value, thus having lasting effects on the economy. “Five categories of competitiveness are usually analysed in studies on attracting FDI: legislative predictability, market size, labour market, economic sophistication, and digitalization level. Romania should first develop a strategy to attract FDI, which should highlight the essential sectors for its development, after an evaluation of the competitive advantages of its economy.” 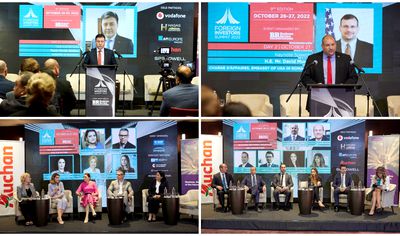 Though Romania still has plenty to do in order to create a more predictable business environment, it remains an attractive destinations for investors. “It is not easy to convince people to invest in Romania. But when you see that the purchasing power in Bucharest is as high as that in Warsaw, it is easy to find customers for projects,” said Jan Demeyere, co-founder and partner at Speedwell.

In his turn, Radu Hanga, the president of the Bucharest Stock Exchange (BVB), noted that we were all witnessing a positive economic development of our country. “The Romanian capital market was the best performing in the CEE region this year from the perspective of resilience—and this is noticeable considering the context. We have a conflict on our border, and we’re used to being seen as a weak spot, a market that overreacts to both positive and negative situations. Looking at the main index, we could see that it was down only 10 percent from the begining of the year compared to 27 percent in Hungary, 25 percent in Austria, and 37 percent in Poland.” 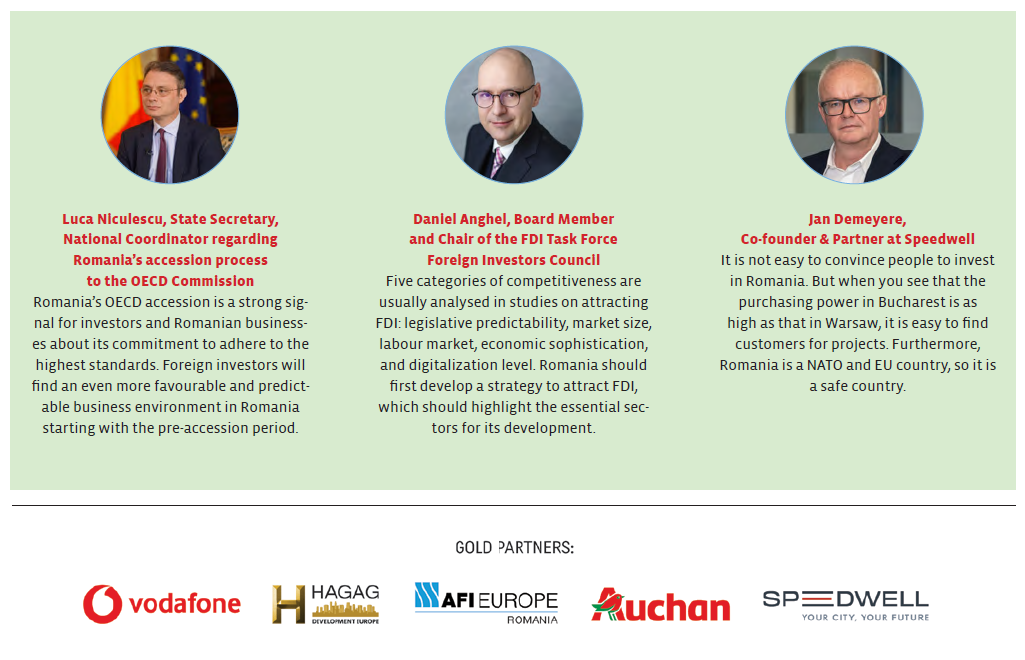 H.E. Ms Laurence Auer, France’s Ambassador to Romania, stated that French companies were among the biggest investors in the country, with millions of customers and tens of thousands of employees. “The success of French-Romanian ventures is symbolised by Dacia, who launched its first electric car here. Dacia is one of the most important parts of Renault Group and it has a Romanian identity. Today, we are the third largest investor in Romania, generating 8 percent of the GDP,” she noted, also pointing out that Romania was an asset for the rest of Europe and that France would continue to invest in the country.

Cristian Preotu, CEO at Le Manoir, said that it was not only large French companies that were operating in Romania, but also SMEs. “And it’s not just about investing, but about reinvesting as well. French companies’ investments may not be taken into account by all the statistics, but they bring in a huge amount of capital.” Official data shows that French companies have invested EUR 1.2 billion in Romania to date. Of the top 20 largest companies in Romania, five are French.

Eric Stab, Vice-President at the Foreign Investors’ Council and Chairman and CEO at Engie Romania, highlighted the fact that foreign investors have found Romania to be a welcoming country and a good place for investments. “Investing in Romania, like in any other country, can be a roller-coaster ride, but when you look back at what you have achieved as a foreign investor, the balance is very positive. That is something that we should not forget.”

Lucian Enaru, Country General Manager at Schneider Electric Romania, said that Romania had become an important support service centre for Schneider, covering over 40 countries. “The high energy prices are forcing us to mobilise all our forces in Romania to implement the knowledge we have about energy management, which we’ve sourced from all over the world.”

Tiberiu Danetiu, Marketing Director at Auchan Romania, noted that investing is not just about the money, but also about value creation. “We have strong relationship with our Romanian suppliers, they’ve been growing with us, so about 90 percent of our products today are local. And there are many small producers that deliver directly to our shops.”

Francois Coste, CEO of Groupama and President of CCIFER, said that Romania offers plenty of opportunities, as the market is not yet saturated. “Investors are aware of the fact that Romanian talent can perform very good services for the benefit of Europe or the whole world.”

A long history of German investment

H.E. Dr Peer Gebauer, the German Ambassador to Romania, said at the start of the third panel of the Foreign Investors Summit that Germany was Romania’s most important partner and that German companies have built great success stories here. “Romania is much more than an excellent economic partner for Germany; we have close political partnerships which are of particular value during these times of crisis and of brutal Russian aggression, so we are relying on this partnership for the entire EU.” He added that we cannot accept the Russian aggression and that all EU countries must help Ukraine end this war.

Theodor Artenie, Head of Tax at Noerr, said that the history of French investments in Romania are going back a long time as there were German companies in Romania at the beginning of the last century. Also, in modern times, there are companies that are already 30 years old.

Mihai Boldijar, General Manager at Robert Bosch, noted that Bosch first started operating in Romania 28 years ago. “Since then, we have constantly grown our business here, having added the factory in Blaj and the call center in Timisoara. Later, we opened another manufacturing facility in Cluj, followed by a research facility. This will continue, as it has been a very successful journey.”

Andreas Lier, Managing Director at BASF Romania, said that his company was also celebrating 20 years in Romania and that the country remains a very good destination for investors. “Romania has the potential to attract new investors, especially in the energy sector, in both natural gas and renewable energy. There are still plenty of opportunities here. Romania has also developed as an innovation hub with a lot of startups and I am very optimistic about its future.”

Dr Christian von Albrichsfeld, Head of Country at Continental Romania, pointed out that they had also entered Romania about 22 years ago. “When we started out, it was a place with good and cheap labour, but we also saw that there were over 200,000 people studying in the universities, and this led us to immediately begin research and development operations. Currently, we have 17,500 employees here and we’ve invested EUR 2.1 billion. In the past year alone, we have invested about EUR 150 million. Around a third of all our employees here are working in research and development. I think this is one of the biggest opportunities for Romania, as it has a lot of young people coming out of universities, including many engineers.” 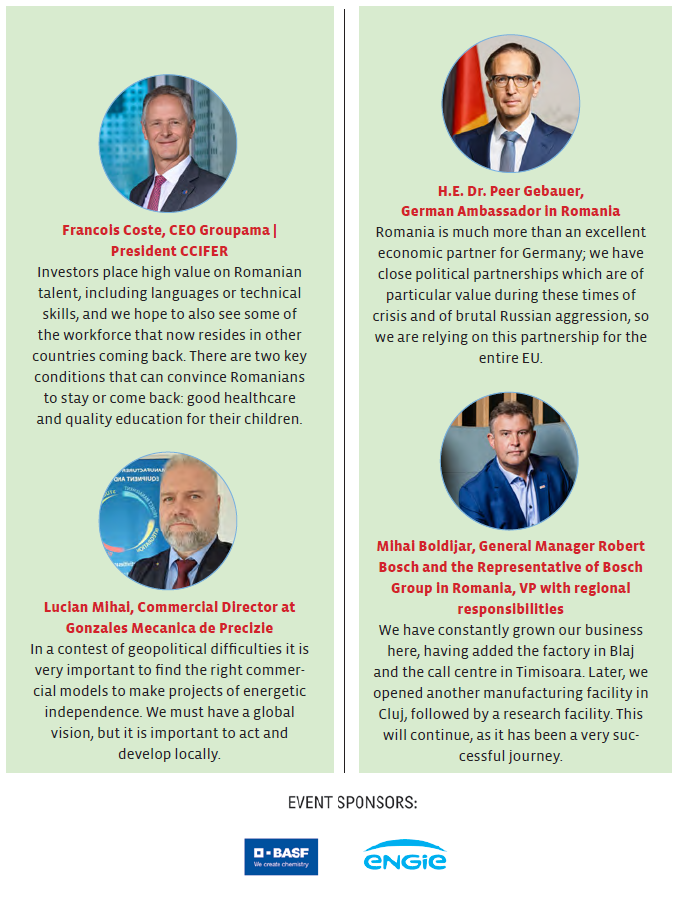