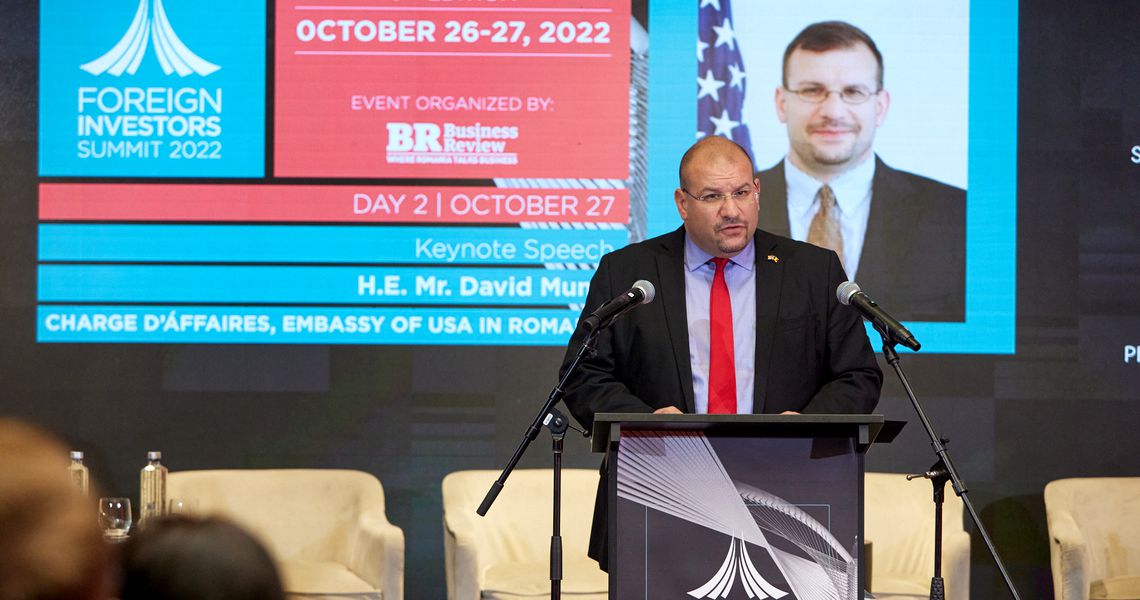 H.E. Mr. David Muniz, Charge d’Áffaires, Embassy of USA in Romania, who opened the session dedicated to US investments in Romania at Business Review’s recent Foreign Investors Summit 2022, held a keynote speech in which he highlighted the importance of the two countries’ enduring diplomatic and business ties. Read the full speech below or watch it again on BR’s official YouTube channel.

“Congratulations to Business Review Magazine for the 9th edition of its Foreign Investors Summit. Thank you for the invitation to speak today. It is an honor to commemorate our countries’ enduring diplomatic and business ties with Romania – and to elaborate on how we can further strengthen these ties. 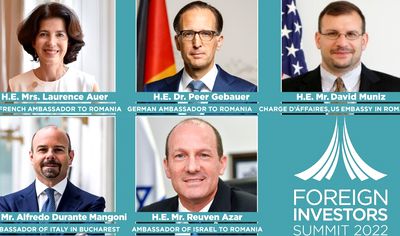 The United States’ global alliances and partnerships – founded on respect for rule of law, transparency, and accountability – have driven unprecedented economic prosperity and innovation over the last 75 years. A shining example of how international cooperation can enhance our collective prosperity took place here… in Bucharest… when the International Telecommunications Union, or ITU, elected U.S. candidate Doreen Bogdan Martin as the first woman Secretary General in the organization’s 157-year history on September 29th. On the grounds of the Palace of Parliament, an overwhelming majority of countries voted for an inclusive digital future that expands cooperation across all stakeholders. Doreen’s election demonstrated a shared worldwide belief that technological innovation should empower the disenfranchised and improve peoples’ lives.

Bucharest was a generous and fitting host for the ITU Plenipotentiary Conference. Generous, as delegates from around the world experienced Romanian hospitality first-hand. Fitting because Romania has grown into a major center for mobile technology, information security and related hardware research. Romania has a well-earned global reputation for developing strong cadres of computer science, technical, and engineering talent. However, Romania’s ICT sector is but one of many industries that have attracted U.S. investors’ notice.

Some of our most storied brands – from the defense, energy, automotive, pharmaceutical, consumer products, ICT, healthcare, finance, and other sectors – support tens of thousands of jobs and have invested billions of dollars in this market. As we salute the American Chamber of Commerce’s 30th anniversary next year, we would highlight that the number of its U.S. and U.S.-affiliated members have multiplied ten times to over 500 members today. We can say with pride that our commercial relationship is a critical component of the 25-year-old U.S.-Romania Strategic Partnership.

In 1997 – the year we signed the Strategic Partnership – the United States imported nearly $400 million of Romanian goods and exported $258 million of American goods to Romania. In 2021, nearly a quarter of a century into our Strategic Partnership, Romania’s exports to the United States had multiplied seven times to nearly $3 billion. At the same time, U.S. exports to Romania quintupled to $1.4 billion.

What brought us here and how can we move forward? Our International Trade Administration notes Romania’s very high Human Development Index measures, its skilled labor force, its population size, and its strategic location. Romania is energetically blessed with nuclear energy, hydroelectricity, oil, natural gas, wind, solar, and more. However, the European Commission’s 2020 Country Report for Romania pointed to persistent legislative instability, unpredictable decision-making, low institutional capacity, and corruption as factors eroding investor confidence. U.S. companies echo these concerns, along with shortfalls in energy and transportation infrastructures that reduce operating efficiency and increase costs. We urge the Romanian government to continue combatting corruption, holding consultations with stakeholders, and conducting impact assessments consistently before enacting legislation to improve the overall business climate and to strengthen its position among EU member nations who also seek to attract U.S. investors.

We applaud Romania’s candidacy to join the Organization for Economic Cooperation and Development, or OECD. I want to reiterate State Secretary in the Ministry of Foreign Affairs for OECD Accession Luca Niculescu’s point that the accession process presents an opportunity to enact reforms that would modernize Romania in the direction of states with consolidated economies. As a close partner and friend, the United States will support Romania’s efforts to achieve the investment climate and rule of law standards that would make it competitive for OECD membership.

Working with Romania and our NATO Allies gives me great hope, as we rise to meet the profound challenges that Russia’s full-scale invasion of Ukraine has posed to the continent’s security and economic well-being. Allies and partners… that is what I see when I look at this crowd. “