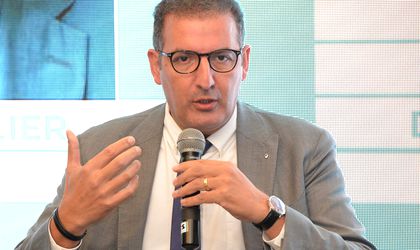 The solution to the workforce crisis and the need for higher competitiveness in the Romanian automotive industry is automation, argued Christophe Dridi, the Managing Director of Groupe Renault Romania and CEO of Automobile Dacia, during the “Investments in the Automotive Sector” panel at Business Review’s Foreign Investors Summit.

“Romania will continue its convergence with Europe and that means salaries will continue to rise – but you have to compensate for this in terms of competitiveness. The automotive sector has to respond to two aspects: the lack of workers and the demand for higher quality. The simple answer to these problems is automation, but that will lead to a need for new skills and create new jobs related to automation and robots. Competitiveness is not an option, and we have to compete both with other countries and other companies.

Customers are very demanding and they want to buy good quality cars, and robots today can build much better products than humans did before. If you look at the second generation of the Duster model, you’ll see that the build quality is much better than the first. The new generation was built by robots, and humans would not be able to replicate that quality.”

He added that car production in Romania is still very strong despite the issues experienced by the German market.

“This year about 200,000 cars will be sold on the Romanian market. However, the country has an issue with the invasion of used cars, most of which are below Euro 4 so are very polluting, they have rather low safety standards and, most importantly, the Romanian state gets no revenues from these cars. ACAROM estimates that the state’s average turnover for a new car reaches EUR 3,700, while that number is 0 for a used car.

“Dacia parts are produced not just at Mioveni, but at 10 other plants around the world. The Mioveni plant produces 1,400 cars per day, 85 percent of which go towards export in western Europe. “

Christophe Dridi also argued that companies like Dacia-Renault will have to step up and do more for the communities in which they operate.

“The business world has to be more involved in the fight against climate change and the green transition. Young generations are asking us to do that and have high expectations from us. We’re not here just to do business; we have a wider responsibility.”

In terms of the things his company has done in order to attract and retain skilled workers, Dridi explained that they have made a major commitment to empower young generations.

“Romania has top skills, and our job is very simple: we have to attract people and make them want to stay here. Young people want empowerment and freedom. They don’t see us as ‘the boss’, they see us more as a facilitator of their development.

Our new head office in Bucharest has taken all these factors into account. Every employee gets natural light, there is a gym they can use in the building, they can get massages, and they can each have two days of teleworking per week. We need to provide those things in order to persuade them to stay with us.”