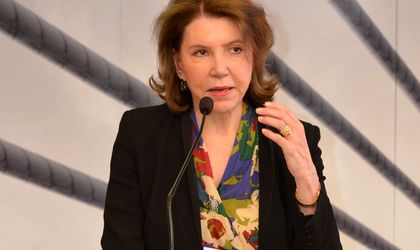 The Romanian economy has had a strong growth pace since the country’s accession in the European Union and part of the growth was made possible by foreign direct investment, said Her Excellency Michèle Ramis, the French Ambassador to Romania, during the opening speech of the second day of Business Review’s Foreign Investors Summit.

“The Romanian economy will continue to grow at one of the highest rates in the EU this year,” said the Ambassador, adding that she was very pleased to be in the country with the biggest economic growth in the EU.

Despite the period of political uncertainty, foreign direct investment inflows are still sizeable in Romania, with an increase of 6.7 percent in 2018. “This country remains a privileged destination for foreign investors, who can find an attractive market with skilled labour and a diversified industry,” says Michèle Ramis.

The investments are beneficial not only for multinational companies, but for the whole economy.

“Over the past months and with the successful EU presidency in the first part of the year, Romania has deepened its integration as a valuable member of the EU family and has strengthened the position of foreign investors in three sectors,” says the Ambassador.

The first sector she mentioned was the automotive industry, which has had considerable growth over past 10 years. Romania has producers like Dacia-Renault, which accounts for 7 percent of country’s exports.

The second sector is agriculture, which has become very relevant for foreign investment. Romania is one of the biggest producers of cereals in the EU with an important share of production coming from small farms.

The third sector is banking, where large foreign financial groups are well represented and contribute to the local economy. The banking sector comes also with some worrying elements though, like the fact that only 58 percent of Romanian adults have a bank account and can benefit from the advantages of financial inclusion.

The low level of infrastructure is also a big obstacle for the automotive industry, increasing the cost of exports. And the tensions on the labour force market are one of the most pressing issues for companies.

“All the difficulties can be overcome if we work together. We must promote all initiatives and have a continuous dialogue between companies and authorities,” says the Ambassador, highlighting the actions of the CDR (Coalitia pentru Dezvoltarea Romaniei – The Romanian Development Coalition), which brings relevant suggestions to improve the business environment in Romania.

As far as the contribution of France to the Romanian economy, the Ambassador mentioned that there are 2,500 French companies present in the local economy, employing 125,000 people.

“At the embassy we have a strong economic service acting like a federation of all the French organisations in Romania. France wants to be a big actor in Romania and to interact with the country to both parties’ benefit,” says HE Michèle Ramis.