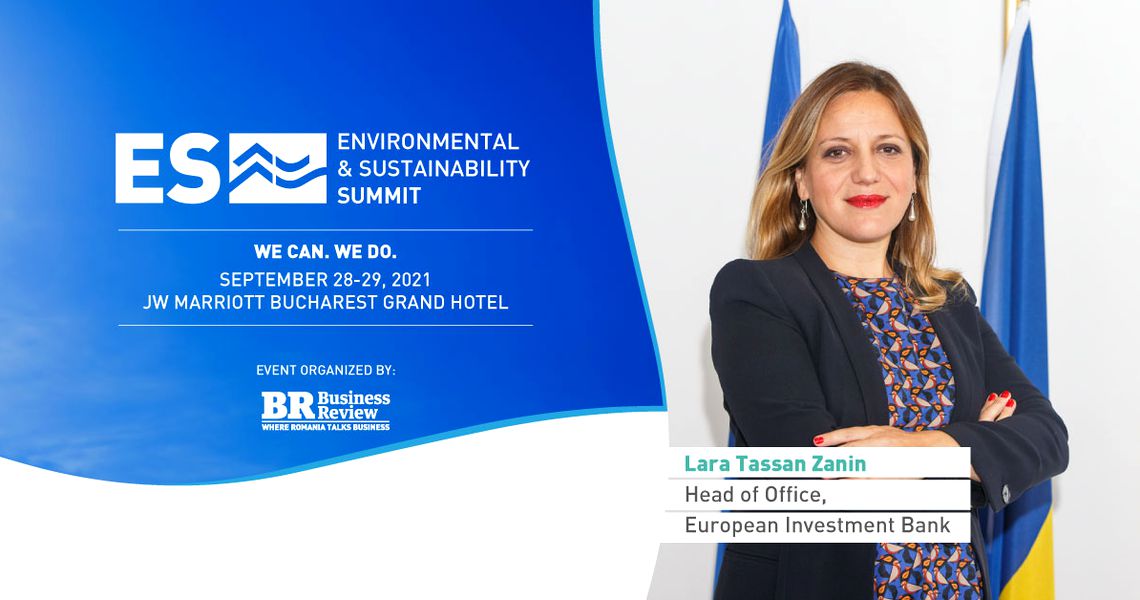 Lara Tassan Zanin is an experienced professional with 20+ years of experience in banking, economics and engineering, having been with the EIB since 2006, initially as a Transport Engineer, then as Adviser to the EIB Executive Director (2011-2013). Between 2014 and 2016 she was the EIB Representative in Ankara, followed by the role of Senior Loan Officer in charge of corporate lending in Czech Republic and Slovakia (2016-2018). Since October 2018 she is the Head of the EIB Group Office in Romania. Tassan Zanin holds several degrees from prestigious institutions, such as Università degli Studi di Trieste (in Civil Engineering), University of Trieste and Massachusetts Institute of Technology (PhD in Transport Engineering), and the London Business School.

“I am delighted to speak next week at the Business Review Magazine #ESS2021 event. The European Investment Bank (EIB) is on the front line of the EU Green Deal implementation. Romania has to seize the chance to #gogreener now to remain competitive within the European market and beyond!” Lara Tassan Zanin posted on LinkedIn in anticipation of the Summit.

Lara Tassan Zanin will be a speaker in the second panel of day 1 (September 28), titled Sustainable Communities, where she will share her valuable expertise on smart cities, transportation, and eco-friendly urban life.

“The first wave of the coronavirus pandemic reinforced the demand for more digital investment while rekindling the need for social infrastructure. How municipalities address green and digital challenges affects their outlook on climate change and is also related to local corporate innovation in these areas,” said Lara Tassan Zanin, head of the EIB Group Representation in Romania, in an exclusive BR analysis titled Smart cities as foundation to sustainable future.

According to Zanin, municipal digital sophistication (such as providing online public services) and green administrative capacity (such as adherence to green budgeting) are associated with greater confidence for municipalities to assess the risks of the transition towards a low-carbon emission economy. “Municipalities that have jointly developed these attributes are also less pessimistic about the physical risks posed by climate change. The share of firms innovating and adopting technologies in digital and green areas rises with the share of municipalities that are digitally sophisticated and have developed green administrative capacities,” she says.

In terms of funding, municipalities are less able to close investment gaps if they are more reliant on capital transfers or grants. This poses a challenge for EU cohesion, since the inability to close investment gaps primarily affects municipalities in less economically developed regions. “For the EIB, investment in smart cities and regions is a way to respond efficiently to its social and territorial cohesion mandate by supporting the upgrade of local economies in a quickly evolving digital world. Cities and regions are key partners for the EIB. The EU Bank supports projects to make cities more sustainable (energy transition, climate adaptation, and efficient mobility), inclusive (housing, health care, and integration of migrants), and competitive (education, skills development, and digital transition). With its advisory, the EIB can help cities with their investment planning and coordination, which is often a weak spot for municipalities across Europe,” the EIB representative adds.