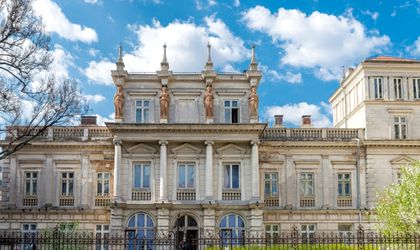 In the middle of the lockdown and the scary statistics of death toll caused by new coronavirus, Bucharest City Hall launched public debates about the future utility of two historical landmarks which happen to be creative platforms for communities: Fabrica Club (11 Iunie Street) and Stirbei Palace (107 Calea Victoriei). The City Hall consultations are illegal, while both happened within Romania’s state of emergency, being mentioned in the decree that the legal regime of limitation and limitation periods are being suspended. ARCEN NGO found out about the public consultations which should have taken place and stopped the commercial actions for now, together with the communities defining these two places.

Down to memory lane

Located at the foot of Filaret Hill, on the current 11 Iunie Street, the Apollo Factory, currently known as Fabrica Club, was founded by Nicolae Cerchez and built in 1898. Since then it has undergone many transformations, even mutilations, but it survived the two great wars, communism and the atrocious real estate assault.

The Fabrica platform is an emblematic industrial heritage element for Bucharest and is specific to the Carol-Filaret District, part of a wider ecosystem of heritage buildings such as Filaret Bus Station (1869), the First Electric Power Plant of Bucharest (1906), the Match Factory 1878), Erhardt Wolff Plants (1887) and others.

Fabrica has been hosting an organically created cultural hub for over 15 years, validated over time by the residents of the neighborhood and in Bucharest, as well as by the local and international creative scene. It is also an example of the reconversion of some industrial heritage buildings, in accordance with the world trends in urbanism. It is a business of local entrepreneurs that gives life to a neighbourhood with potential, being for several years a cultural space and a creative node.

The Stirbei Palace was built around 1835, according to the plans of the French architect Michel Sanjouand, at the request of the future lord of Wallachia, Barbu Știrbei (1789-1869). The neoclassical style palace with many Greek elements will be used by Barbu Știrbei, between 1849-1856, as a royal residence of protocol, here several balls and parties were taking place.

After 1869, the palace became the property of the ruler’s sons who built the stables and annexes on the land behind the palace. In 1881 the palace was restored by the architect Friedrich Hartman, at the request of Prince Alexandru Știrbei. Then the floor was added, including the facade decorated with the four caryatids, as well as the northeast tower. Between 2001 and 2004, the palace was recovered by the heirs of the Stirbei family and later sold in 2005 for 11 million euros to businessman Ovidiu Popescu, who died in 2011, and the building remained to Alexandru Popescu, his son, notes Economica.net.

“The recently established Municipal Sustainable Development Company has created a Zonal Urban Plan (PUZ) requesting derogations from the urban regulation and plans to demolish the current factory building and build an 8 floors residential and commercial complex for the benefit of Compania Imobiliara Gramont SA, in an area where local regulations stipulate the maximum allowable height of buildings as 16 m. The PUZ has already taken all necessary approvals, including that of the Ministry of Culture and National Identity, and only needs the vote of the General Council to approve and constitute the basis for the demolition of the buildings on the site”, the text reads.

After a wave of dissatisfaction was aroused and support groups has been created, the Ministry of Culture, through the Culture Department of Bucharest, launched on May 4 the classification procedure of the building located on 11 Iunie Street no. 50, Ovidiu entrance no. 6, in which the Fabrica club operates.

For Fabrica, an online support group has been settled and over 3000 active members signed petitions and wrote emails to the City Hall to stop the construction of the blocks. Mass media played an important role, promoting the news and taking several opinions from architects, decision makers, National Patrimony Institute and even politicians to figure out if the City Hall’s initiative is following the correct path. Asked if mass-media pressure is a way to save patrimony buildings, Alberto Grosescu from ARCEN NGO says that “In recent years, the pressure exerted by the press on real estate developers and the authorities has managed to block many projects, or to provoke a reconsideration of some who did not comply with current legislation, being an important means of saving the built heritage. Many of our actions and those of other NGOs would not have had any effect without the support of the press.”

The need to reaction is still on: although the Minister of Culture announced the beginning of the procedure for classifying the factory building as a historical monument – meaning that no intervention could be made afterwords, up at this point, the City Hall did not withdraw the project and continues with the adoption on June 1 of the new Zonal Urban Plan that allows the construction of blocks with + 8 floors over the creative platform.

“Even if private property is a right guaranteed by the Constitution and it is normal to be so, we must not forget that the cultural landscape is a good for all, both ours for today and for future generations. There are many people who understand this and report irregularities or illegalities that abuse property. Citizens get involved through official addresses to local authorities, by informing NGOs or by supporting and circulating information to a large number of people. Every week, ARCEN receives numerous alerts from citizens about non-compliant interventions, construction sites or demolition. Online petitions are very useful, because a large number of people who support a cause means a pressure on the authorities or investors and they are obliged to react in accordance with the law,” explains Albert Grosescu the importance of citizen’s active involvement.

Politics in times of coronavirus

Edmond Niculusca, the president of ARCEN NGO, discovered one day that same City Hall invited citizens between April 1-24, 2020 to a Public Consultation on the “Intention Phase Elaboration of PUZ – Știrbey Palace Multifunctional Complex” in Calea Victoriei 107. The public, residents, residents of Bucharest, specialists were not able to communicate its observations and proposals, as the consultation period coincided with the restrictions imposed by the state of emergency that limited the movement of citizens through the city. At the same time, ARCEN noticed the City Hall that they didn’t comply the provisions of the law to announce the project on public platforms (city hall website, urban platform, etc.) while the project is in the public consultation phase, violating the regulations applicable to a proper public consultation, according to Order no. 2701/2010 for the approval of the Methodology for informing and consulting the public regarding the elaboration or revision of the spatial planning and urbanism plans.

The debate about Stirbei Palace is on for more than ten years now, currently being proposed a multifunctional complex, including a real estate project that proposes the construction of a block of 7 floors, respectively 34 meters high, in the garden of the Stirbei Palace on Calea Victoriei 107, consolidation and restoration of the palace building.

It’s still a long-lasting fight for Bucharest patrimony, but while seeing the civic platforms and implication in community projects that affects the creative and cultural spectrum, there is might be hope.