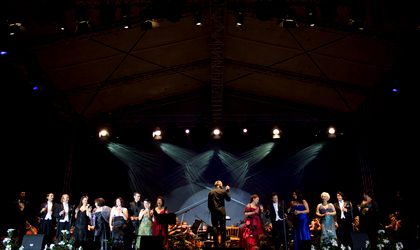 On September 1, classical music lovers are welcomed to the sixth edition of the “Opera’s promenade”, a free of charge, open-air concert taking place on the esplanade of the National Opera in Bucharest.

For this year, the organizers invited the National Opera’s choir, conducted by Stelian Olariu, to participate. They will interpret fragments from well-known compositions, such as Triumphal March from “Aida”, Slave’s Choir from “Nabucco” and Faust’s Solder’s Choir.

The 2012-2013 season starts on September 16, with the performance “Un Ballo in Maschera” (“A Masked Ball”), an opera in three acts by Giuseppe Verdi, libretto by Antonio Somma after the libretto “Gustav III” by Eugène Scribe for an opera by François Auber.

The National Opera of Bucharest is a repertory theatre for opera and ballet. Since 1921, the National Theatre is the heart of music theatre inBucharest. It has been in its present location since 1953 and has a seating capacity of 1000.