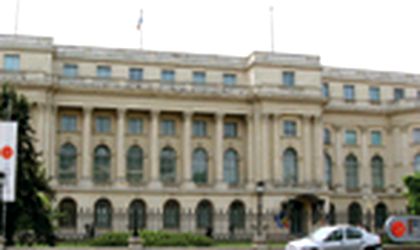 The exhibition, organized on the occasion of the inauguration of the first La Caixa subsidiary in Romania, includes 24 Spanish paintings from the art collection of the La Caixa Foundation. They are the works of 13 groundbreaking artists, representatives of the abstract trends that defined art in post-war Spain. Featured artists include Joan Ponc, Antoni Tapies, Antonio Saura, Luis Feito, Martin Chirino, Jose Guerrero, Joan Hernandez and Jorge Oteiza who contributed to the renewal of the art in 50s and 60s Spain, which was undergoing significant political, economic, social and cultural changes. The artists were exponents of abstract and informal art.
The aim of the exhibition is to illustrate the change of direction in Spanish art around 1957, which marks the end of the post-war period in Spain. The exhibition is open until January 27, 2008. On the first Wednesday of every month the public can visit free of charge.
The project is the first collaboration between the National Art Museum and the La Caixa Foundation, which owns a valuable collection of Spanish and world art, collected over the course of the past two decades. It includes at least 700 paintings and sculptures, pictures, video art and installations, gathering works by Spanish and international artists who have changed the face of the world art scene over the last half century.
La Caixa is currently the biggest savings bank in Europe and the third-largest financial group in Spain. The social project La Caixa is the largest private foundation in Spain, the third in Europe and the sixth in the world from the point of view of the budget it is granted.