REVIEW: Summer Well does it well 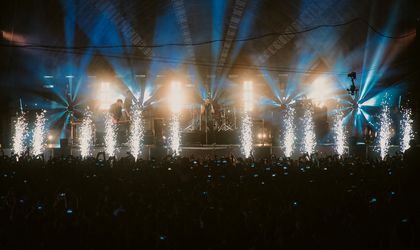 If Monday morning you woke up with glitter on your pillow and pineapples in your head, then you are one of the lucky ones who spent two evenings this past week-end in the cool enchanted forest of Buftea listening to some of the coolest bands of this summer. If not, read below our four takeaways from 2017 Summer Well, a festival that quenched our thirst for alternative music.

2017 Summer Well was very well curated. This year’s lineup, which we dubbed the  7-year-old festival’s most enticing yet, brought to the stage of the festival a mix of bands and performers whose music was fresh, relevant and oh so good live. With many of the acts fitting Bucharest among summer destinations that included Coachella, Glastonbury, Lolapalloza Paris, Sziget and Lowlands, the lineup sounded very much like the well-informed music listener of 2017’s YouTube mix. Or, with little exception, like a handpicked selection of what the UK’s music scene has to offer in the summer of 2017. Oh Wonder were wonderful. Soulful London-based alt-pop duo, a partnership between Josephine Vander Gucht and Anthony West built on real chemistry, took to the stage on Saturday afternoon. Their earworm hits from both their first and just-released second album Ultralife, thrilled above all the young crowd. The Kills killed it. The performance of British-American indie rock duo Jamie Hince and Alison Mosshart was for many the highlight of the first day of the festival and they did not disappoint. Although in past years Hince received most headlines, mostly for matters not related to music, on Saturday Alison, the lead vocalist, was the one to watch as she jolted and jilted around the stage, seemingly possessed by the spirit of music itself. Their performance of Heart of a Dog, from their latest album Ash&Ice (2016), was one of the live performances of the festival. Interpol turned on the bright lights. Bringing ‘music for mature personalities’ – a term casually dropped by a festival goer – the NYC trio put on a solid show to close the first day of the festival. Everything was right about the band’s performance, whose new album will drop in 2018, but listening to My Desire (part of their 2014 album El Pintor) live would have been perhaps even better. Interpol’s Summer Well gig was part of the ‘Turn on the Bright Lights’ anniversary tour, which sees them tour in Europe and the US performing front to back the songs on their 2012 influential debut album. Interpol, which headlined Summer Well’s first edition back in 2011, returned this year, a further proof of its solid reputation and growing musical legacy. Nothing but that voice! When Nothing but Thieves took to the stage on Sunday, there was nothing to focus on but Conor Mason’s classically-trained, operatic voice. Their performance, which consisted of songs from their first album, released two years ago, to Mason’s amazement made the crowd sing along to most songs. What’s more, the Summer Well crowd acquitted themselves nicely when the moment came for that potentially embarrassing part of the show when the artist asks for the crowd to join in for the chorus. ‘That is the best sing along ever,’ the lead vocalist said, earning this year festival’s audience a well-deserved compliment. The gig ended with Amsterdam, the first single from their upcoming second album Broken Machine, set for release on September 8, and honestly, felt just a tad too short, for the amount of adrenaline it managed to shoot into the crowd. With a cute nickname that fitted perfectly the wild setting, Jasmine Lucilla Elizabeth Jennifer van den Bogaerde aka Birdy sang ‘like a bird in the woodland, if a Hans Christian Andersen reference is not out of place in 2017. (Is it?) During the British singer’s performance, her voice filled the air, and together with the poetry-rich lyrics brought a touch of magic to an already enchanted evening. The audience vibrated, raised signs and cheered during the singer’s most well-known songs, although the general mood was one of quiet contemplation. According to post show confessions, the performance made some of the most sensitive types see their whole sentimental life pass before their eyes. Live, Glass Animals are a different animal. One of the – perhaps unexpected – highlights of this year’s festival, Glass Animals stole the show on Sunday with their energy filled gig. What many expected to be a tame performance by a band that made a name for itself with an elaborate and catchy yet somewhat clinical sound, exploded into one of the quirkiest performances by an artist the audience had ever seen. Greeted by the eager audience with cheers, ‘a wicked sign’ and an underripe pineapple, the band, one of the hottest names right now, performed songs from both their 2014 album Zaba and their latest, Mercury Prize-nominated album How To Be a Human Being (2016). During their performance, lead vocalist Dave Bayley – closely followed by Drew MacFarlane who seemed to do more dancin’ than keyboard touchin’ – resembled a puppet on million of invisible strings that were pulling him in all directions. At one time, he ventured right of the stage and – hidden from the eyes of devoted fans who had formed a block at the front – mingled with the crowd. “Look, there he is”, one voice said, and pointed to a sea of hands, only to resurface near the fence, meters away on his return to the stage. Bayley, who recently put his body to a tough test during the filming of the just-released video for their single Agnes – one he is deeply fond of – only took respite when performing it towards the end of the show, having climbed up, his bandmates taking a step back, hidden from the limelight. Public vs. Editors, who won? The British rock band’s last performance, back in 2009, was one many Romanian fans still remember. Chances are, this latest one the Editors won’t have an easy time forgetting. The Editors gig was long awaited and did not disappoint, making the forest roar to the sound many were as familiar with as to sing along most songs. With a setlist that spanned several albums, included Sugar, Eat Raw Meat = Blood Drool, Two Hearted Spider and their evergreen hit Smokers Outside the Hospital Doors, Editors enthralled the audience which poured love through their waving hands, cheers and claps in between and during songs.

Much can be said about Tom Smith’s onstage persona, which seamlessly combines poise with a playfulness that saw him climb the upright piano and ride the rhythmic guitar, and his devilish mimic on stage, but what touches the most is his voice – with an impressive range of 4.75 octaves – that can so easily translate words into emotion. Apart from the joy of listening to one of the most solid bands on the musical scene performing live, Editors’ high energy performance, which the band finished drenched in sweat, had other quality: that of reminding the public, too easily accustomed to listening to music at the touch of a button, how great music is made: by using your soul and pushing your body to convey that energy that touches lives. After the encore, the band members grabbed each other by the shoulders and, at Smith’s signal, bowed twice, having thanked the audience many times, even during songs. Upon leaving the stage, they threw at the crowd almost everything they could dispose of, and sent a staff member to distribute the paper sheets where they had printed the setlist, scribbled with handwritten notes.

All in all, 2017 Summer Well was well worth to forego a week-end at the seaside for. What will next year’s line-up look like? If reruns are in fashion, then The National would be our top suggestion!