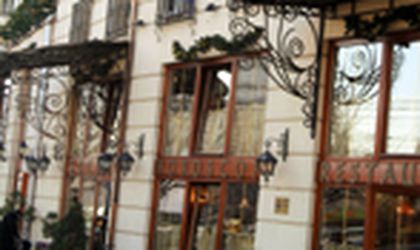 Salomon Kadosh, a visiting Spanish businessman, has chosen Le Boutique Hotel Moxa mainly because of the helpful staff and the feeling of trust the hotel and its people give to a newcomer. It is Kadosh's second time in Romania and also his second stay at the hotel. The hotel had been recommended to him by a previous guest. This is how news of a boutique hotel spreads and the downstairs lounge of such a hotel, where guests meet and chat, can reveal many of such examples.
Bucharest has just a few fancy small hotels spread around the city center, booked mainly by foreigners and known in the local expat communities as more affordable yet fashionable places to stay. Most hotel owners don't even place their hotel in the boutique category. Irrespective to what they are called, and of their limited number, these hotels fill a niche in the Bucharest hospitality market.

Filling up a small hotel becomes a challenge
Kadosh is one of many guests who return for a second stay or more. The rate of returning visitors to such hotels is quite high, says Roxana Stanciu, marketing manager of le Boutique Moxa Hotel. Over 90 percent of the hotel's visitors return.
Located close to Calea Victoriei and to Victoriei Casino, Moxa has only 24 rooms on four floors. The small number of rooms, is one of the main traits of this type of hotel. Lower prices also come with the package, although these vary according to the hotel's classification. Moxa, for example, is four-star and charges between EUR 140 and EUR 210 per room, depending upon its size. At Rembrandt, another well-known small hotel, the tariffs vary between EUR 68 and EUR 135, depending on the type of room and day of week.
Unique Hotel, close to Piata Romana, is four-star hotel and its 15 rooms go for between EUR 79 and EUR 120.
At an average stay of three nights in the most expensive room of the hotel, a guest in Moxa hotel may pay up to EUR 600, while a similar stay at Rembrandt, would cost around EUR 500.
Tariffs are usually discounted for longer stays and for groups, as with most hotels. The challenge is to fill the empty rooms. “Sometimes, if a big group comes to book rooms, we almost have to say no. We have to play with the availabilities all the time,” says Jerry van Schaik, manager and co-owner of Rembrandt Hotel. “This keeps us from achieving 100 percent occupancy, but it is something we are working on. Last year's average occupancy was 85 percent, and was a satisfactory one,” says van Schaik. It was so satisfactory that the initial investment in the hotel, some EUR 1 million, was returned earlier than expected – just two years after opening it. The initial funds mainly went into buying the building, renovating it and shaping it into a three-star hotel.
The 16 three-star rooms in the Rembrandt hotel are usually filled, even now in January, which is a slack period for the hospitality industry. Roxana Stanciu of Moxa says that during December to January and July to August occupancy rates drop from 80 to 90 percent to as low as 60 percent. However, a hotel located smack downtown, like Moxa close to Calea Victoriei and Rembrandt in the old part of Bucharest, manage to fare better.

Who's staying
From Monday to Friday, business travelers fill these hotel rooms. During the weekends, they host tourists, mostly from abroad. Rembrandt hotel has a lower weekend tariff. People will also choose a smaller hotel because of the price. “More cost-conscious people choose smaller hotels and most of these people come from international companies. They are not top management, however,” explains van Schaik. Business travelers, consultants for EU projects in Romania and representatives of big companies like ING, Petrom, and Philips have been among Rembrandt's guests over time. This kind of visitor returns and may stay for longer periods; sometimes up to 6 and 7 months.
Personalized services vary from leaving a basket of flowers and some fresh fruit in the room the day the visitor arrives, to making restaurant reservations or giving advice on Saturday nightlife. This is what adds flavor to these hotels and distinguishes them from larger ones.
“A personal connection is established and the feeling of comfort brings people here for a second stay,” says Roxana Stanciu. In the end, choosing a place to stay is a subjective decision, which is why most people come to such hotels having heard about them from friends or relatives. “At the beginning when we opened Rembrandt, the Dutch community in Bucharest gave the business a push by recommending the hotel among its members,” remembers van Schaik.
Online bookings are also very popular among foreign visitors. Bucharest is still seen as an exotic destination, explains van Schaik, and it lacks the proper promotion. “I am doing my personal best to promote Bucharest as a tourist destination,” he says.
Moxa has used indirect promotions. “Our hotel hosted photo shoots for different magazines and on different topics many times. We had people calling afterwards asking about the hotel as they had seen in the magazine,” says Roxana Stanciu.

Small but promising market
There are not more than 10 small, fashionable hotels in Bucharest, and there may be room for more and for better, believes Stanciu of Moxa, which was opened only at the beginning of last year, by Israeli investors Ben Zion Winzelberg and Givony Arie.
Van Schaik believes there are only three or four small-scale hotels with a nice design and good services in Bucharest. Besides these, says van Schaik, there are a few oriented towards business people, but which offer no extra services. Overall, there are more small hotels with a varied focus in the capital city, agree the two hotel representatives.
Pundits say the value of the small hotel market in Bucharest is only 9 percent of the entire hotel market in the capital. This is only an estimate as most of these hotels are poorly publicized and reluctant to disclose business figures.
Van Schaik says the hotel he runs posted some EUR 400,000 in turnover last year with an average occupancy of 85 percent. If all the ten small hotels in Bucharest were to post the same turnover, the value of this market niche would barely exceed EUR 4 million.
At an average of 20 rooms per hotel, boutique hotels have no more than 250 rooms in Bucharest. In comparison, the most recently opened hotel in Bucharest, Accor's Novotel, has 258 rooms. A common internet engine search with the key words ‘small hotel Bucharest' returns several names of such hotels in the capital city. This is what a foreigner in search of this type of accommodation would look at prior to choosing.

One hotel leads to another
Boutique hotels target up-market people who like art and architecture, something Bucharest is able to offer. Unfortunately, Bucharest is not yet well promoted as a tourist destination, which drives such up-market people away, explains van Schaik. So from this point of view, for the moment, there is no need for more boutique hotels.
The three-star hotel market is poorly covered in Bucharest by small and large-size hotels. This is why Van Schaik is planning to develop a three-star hotel in Bucharest's historical center. “We should sign the last papers in March, following a period of legal fights over the building's ownership,” explains the Dutchman. This second hotel, which is expected to need EUR 2 million of investment, will have around 50 new rooms. They will be smaller than Rembrandt hotel rooms, which cover some 25 to 32 sqm and the tariffs should stay at approximately EUR 70 to EUR 80 per room during the week, expects van Schaik.
Although it is too early to decide whether the future hotel will be affiliated to an international chain, the Dutch investor doesn't rule out the possibility. The new hotel should be ready by the end of 2008, says van Schaik.