Skydiving festival lands in Bucharest at the end of September 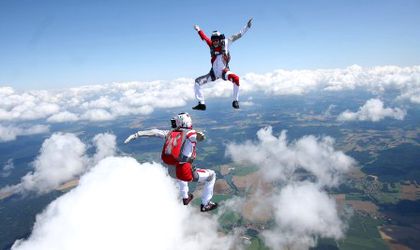 The Bucharest Skydiving Boogie 2011, the first skydiving festival in Bucharest, kicks off between September 22-25. The event will feature jumps for amateurs performed together with professional instructors. The jumps will be made from the highest altitude in commercial jumps: 4,500 meters. The festival targets professional skydivers as well, and these will have the opportunity to improve their technique alongside internationally qualified instructors.

A premiere for the festival is the two simultaneous jumps performed from a Cessna 206 YR-TNT and a Pilatus Porter PC-6 I-CAKE. The TNT Brothers team will organize a formation of 15 skydivers free falling from 4,500 meters high.

The festival is organized by TNT Brothers, a skydiving school opened in 2006 by brothers Dragos and Bogdan Boeru.