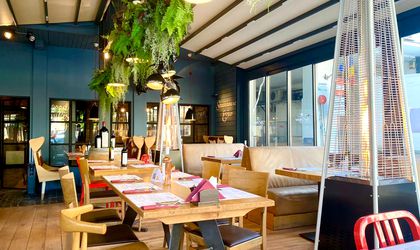 Red Angus Steakhouse, one of the first steakhouse restaurants in the country, has moved to Amzei Square, in Bucharest. Thus, starting with May, the place that was founded in 2010, in the Old Center of the Capital, welcomes its guests in a new space, decorated in the American style that guests know and appreciate.

“Amzei Square is extremely appreciated by consumers of gastronomic experiences, being a pole of attraction for guests of all ages. We are confident in its potential, we know that some of the HoReCa trends are set there and we estimate that the area will continue to develop in the coming years,” says Dragoș Panait, co-owner of Red Angus Steakhouse.

The steakhouse benefits from a friendly culinary vision, with an attractive menu that brings together both well-known dishes such as the famous Red Angus beef steaks and burgers made in its own kitchen, as well as new, attractive dishes created to fit the profiles of fresh, dynamic, consumers. Thus, those who cross the threshold of the restaurant can enjoy different variants of quesadilla, beef lasagna, ribs and others. Moreover, lovers of culinary delights will find at Red Angus Steakhouse one of the only oxtail soups, served in Bucharest, but also the juicy bones with marrow. Additionally, there is a series of casual dishes that can be divided and associated with the wines available on the menu.

Red Angus Steakhouse collaborates with both local producers, who provide fresh, seasonal fruits and vegetables, but also with international suppliers. Beef is imported from the US and Australia, countries recognized for their high quality.

“Our goal is to be close to local producers and to develop strong and stable relationships with them, to support and encourage them. That’s why we chose to collaborate with LarcertA, and, also, with other suppliers in Romania. We are already allocating resources to discover Romanian farmers and wineries and we are always open to proposals,” says Dragoș Panait, co-owner of Red Angus Steakhouse.

The investment in the new restaurant was 250,000 euros. For the 8 months of operation until the end of the year, the representatives of the restaurant estimate a turnover of approximately 450,000 Euros.