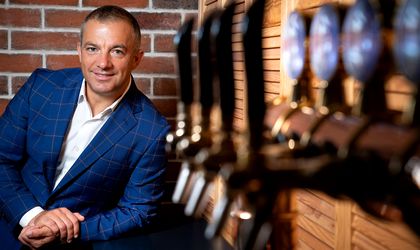 City Grill Gorup, the largest Romanian brand in the restaurant industry, had an RON 81 million turnover in the first six months of 2018 – a 15 percent growth compared to the same period of the previous year.

The growth recorded in the first half of the year was determined by the contributions brought by spaces opened last year (Trattoria Buongiorno Old Town and Trattoria Buongiorno Arena), as well as by the investments made into refurbishments and the introduction of new dishes in the menus of the Pescarus and Hanu’ Berarilor restaurants.

The first six months of 2018 were marked by the refurbishment of Pescarus restaurant, a project worth EUR 300,000, and the start of works on a major construction project for an additional space to be added to the Hanu’ Berarilor restaurant – Casa Soarelui (The Sun House). The project has a budget of EUR 1.5 million and involves the construction of an events hall for 180 people, as well as an operational space for the kitchen.

“Hanu’ Berarilor Casa Soare is a class A historical monument, same as the Triumphal Arch, which is why any construction we do at this restaurant comes with extra responsibility. The number of foreign tourists attracted to this restaurant is growing and we expect that in a few years Hanu’ Berarilor will become as popular as Caru’ cu Bere is today. Through this investment, our goal is for Hanu’ Berarilor to be able to accommodate large events, and the space now occupied by the kitchen to become available for customers,” says Daniel Mischie, City Grill Group CEO.

The group’s investments and its focus on the introduction of technology in the operations of restaurants it owns have turned the Out4Food app, which allows 10 percent of the value of each bill to be collected for future purchases, to become the most frequently accessed and well-performing fidelity system in the Romanian hospitality industry.

In the first six months of this year, almost 45 percent of the group’s sales went through the Out4Food programme, and the number of transactions increased by 18 percent. The number of active accounts has grown by 17 percent, and app retention is at 99.56 percent.

City Grill Group made another step towards technology this year by introducing a pilot for ordering using a tablet in the City Grill Baneasa restaurant. In the following months, the option will become available in all restaurants owned by City Grill.

“Orders made using a tablet are a novelty in Romania, which is why we pay attention to the feedback we get from client regarding this digital approach. The clients receive the tablet that’s already connected to the system at their table, they scroll through the menu, decide what they want to order and can place the order on their own, without any help from the waiter. However, calling a waiter is still an option, of course. We’re still at the beginning, still testing, improving user experience, fixing bugs and thinking of long-term efficiency. Our main goal is to improve table service, in the sense that waiters have more time to help customers and make recommendations,” says Mischie.