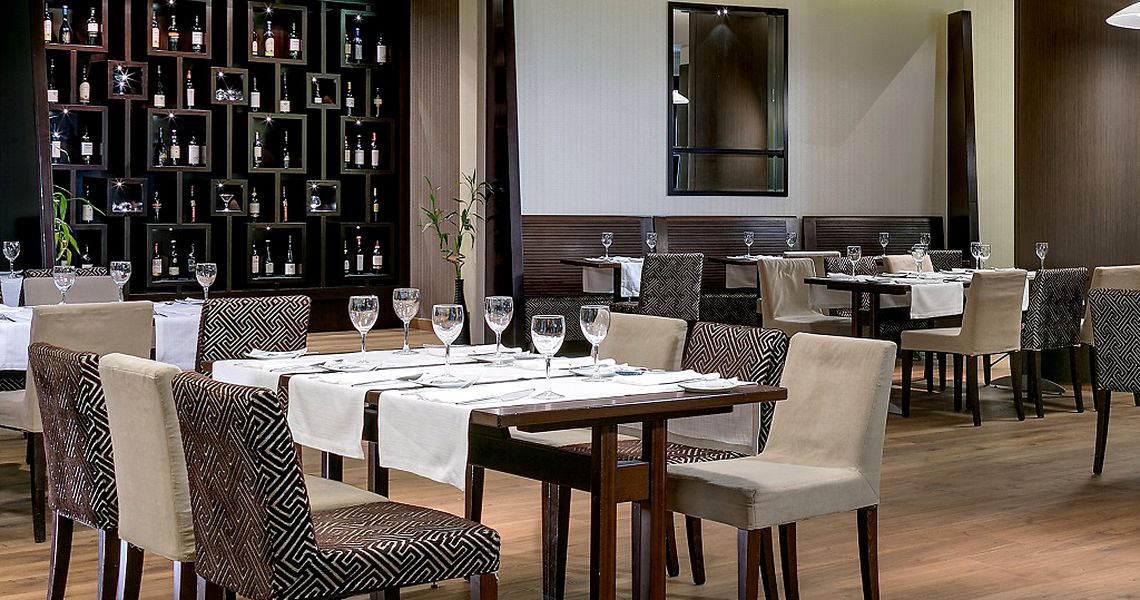 Let’s go to the Sheraton’s first floor restaurant. In case you have not been before, it is split into two dining areas. On the left as you enter is their Benihana outlet. Here your order is cooked in front of you on a Teppanyaki, a flat metal hotplate. You sit down in front of the Teppanyaki hotplate and watch the artistry of the chef whilst at lightning speed he cuts, chops, spins your dish. It is pure showbiz, and well worth the show.

In the same room there is a sushi section, where there were 30 sushis waiting for you to pick up, or better still watch the chef make and roll your individual choice of sushi. So now let’s move into the main restaurant.

Sunday brunch is fundamentally a help yourself and eat till you burst buffet together with a hot carvery. It was a hot Sunday, and I spied a tray of chilled smoothies made from a blend of melon, orange and passion fruit. Wow, it could not get better.

But away to food. I passed on their hot soup selection along with their endless varieties of bread. My eyes fell on a huge platter of oysters on ice. Many years ago I ate 100 oysters in Galway (Ireland) for a bet. I only quit after I ran out of money, I could have continued. So I love the little beasties, but to help the House, I only took six of them. Next up was lobster. This used to be a staple dish when every hotel was competing for your brunch business a few years ago, but it has disappeared from most restaurant menus in town due to its high cost. But not here, you can eat as much as you like.

However I was amazed to see the huge long claws of Alaskan King Crab. Discovery Channel runs and reruns its program The World’s Deadliest Catch following fishers in the Barents Sea where numerous fishermen lose their lives in the storms, just to catch crab. Well, I am heartless, so I am indifferent to the fate of the fishermen; I don’t even know their names (hell, they are just doing their job).

All I want is the crab claws, and I got them on Sunday!

Then there was salmon in every format, in vol-au-vents, fresh, marinated… and so on. There was a huge cauldron of wonderful mussels (midii), but enough of the fish. I am a born again carnivore, so I am hunting for meat. And I was not disappointed. Neither was Blondie who harpooned a pork chop. She professed it to be the best pork of her life. I said, “Dammit woman, it is only pork in wine.” But no. She said it was so slow cooked that it fell off the bone and she was in awe.

But for me, I had to hit the hot carvery. The chef cooked me a perfect foie gras on toast topped with the traditional fresh fruit compotes. I had to try their massive fillet steak, baked in a salt crust. Salt crusting, like an igloo over the food, is a chef’s best friend. Even if he falls asleep and forgets the dish, as long as it is on a low heat, the meat under the igloo will be perfect and moist.

Throughout the meal, we enjoyed a superb Cabernet under the brand name of Zana. It was heavy, but without being dragged down by too much tannin. A perfect balance, and bravo House for making it the Brunch wine.

There was a mountain of duck legs, all tender and brown. Something tells me that next week we will be feasting off duck breast. At this point I was full, but not so greedy Blondie. A chocolate fountain beckoned to Blondie and all the kids in the joint. There was every dessert imaginable, as long as it was laced with chocolate, cream and fruit.

And is it expensive? Well no. I reversed engineered the retail price of all the food I consumed, and I was in credit. Yes, it would have cost more if I had bought it over the counter.