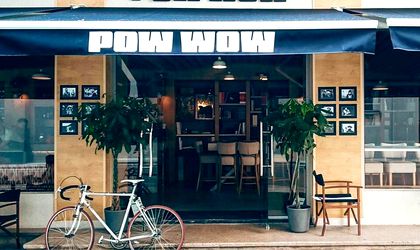 I had received mixed reports about this place, so I had to grace it with a visit, and I wish I had not! The décor is delightful, and packs a punch of ‘youth appeal’. To add to this, the waiters are absurdly young and inexperienced, but more of that later.

So Blondie and I went there on a Tuesday at 2 pm. We expected to see the remnants of a busy lunch, but no – there was only one table of two people eating. I realized that the locals who should have populated the place knew something about Pow Wow that I did not, namely that the food is crap. The menu revealed safe choices, which again would appeal to the young, but whether they could afford it is another matter.

So I started with a ‘selection’ of Italian salami, with olives, mozzarella and parmesan – all a few grams in weight (save for the heavy cheap mozzarella) and at RON 43 they were taking the piss! I asked our waiter to tell me the varieties of salami in my ‘selection’. “But it is salami,” he protested. It was blindingly obvious that the kitchen had not prepped him, and that he knew nothing about food. Hardly surprising, as the chef knew nothing either.

The ‘selection’ was one variety only on my plate. The cataracts of ignorance fell from his eyes when I informed him salami is not a brand, but a collective term to describe literally hundreds of varieties of meat/pork products. The lazy kitchen had popped around to Mega Image and bought some packs, and slapped three razor thin slices of salami on my plate at RON 43.

Worse still, as I am a chef, one look at the ‘parmesan’ told me it was ‘Padano Grano’ ( I didn’t need to taste it) – a cheap look-alike impersonating parmesan and a complete fraud. We had a new waiter now who remonstrated that it was parmesan. I sent him to the kitchen to ask the ‘chef’ and he sheepishly returned to tell me I was correct. Even the olives were second rate. I expected meaty Greek ‘Kalamata’, but no – I got tiny cheap olive bullets which nature had designed to break your teeth on the stone.

Blondie was also disenchanted with her choice of simple vegetable spring rolls with a sweet chili dip. The dip was cloying thick sugar water with a few chilies which did nothing to add to the flavor, and all colored with a splash of tomato puree. But the culprit that destroyed this dish was the rolls, which should be deep fried and arrive thick, firm and crispy. No, she got a bunch of rolls which had not seen a fryer, as thin as your smallest finger and resplendent with a texture like chewing gum. I suspected they just microwaved them from frozen, or heated them in an oven.

Nor did she win first prize in the lottery of culinary excellence with her choice of marinated pork ribs at RON 41. Meat should be marinated to enhance its flavor and to tenderize it. Her ribs should have been marinated overnight, but not these, which were tough, overcooked and coated with a slimy, unpleasant sauce. She was forced to tear the ribs apart with her hands in order to eat them by biting the meat off the bone. It was not a pretty sight as the marinade dripped down her wrist – but did the teenage waiters offer her a finger bowl? Not a chance.

Away we went to a simple hummus which both looked like, and had the texture of, wet cement. If the chef knew the five simple ingredients to make this simple dish, he didn’t know the correct amounts to blend. It was so bad that I suspect the kitchen used ordinary white beans rather than chickpeas.

And now for my punishment. I ordered a ‘muschi de vita’ – OK, a steak which was inexplicably accompanied by a creamy mushroom dip. What an absurd combo. A steak should be complimented by a dish that respects and enhances its strong flavor, such as horseradish (hrean) or mustard, but not this weak, wimpy mushroom mush.

To add to my misery, I asked for a glass of house red to wipe away the ghastly taste from my palate, and it arrived at a whopping RON 25.

There is no hope that this place will survive unless it replaces every member of its staff, both kitchen and waiters, with seasoned professionals. But I fear it will not do so, in which case I predict this temple of mediocrity will not be here in 12 months’ time.